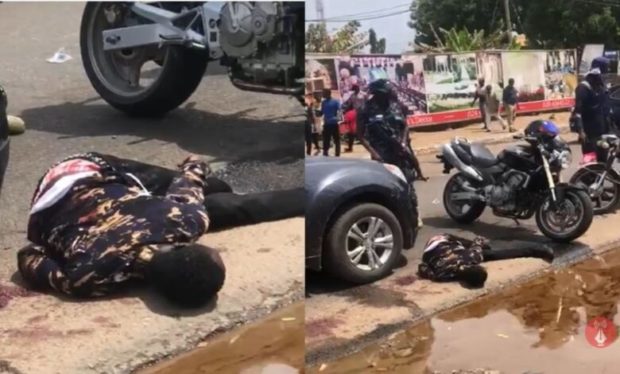 A thirty-six-year-old man has been shot dead in a daylight robbery at Atonsu in Kumasi Monday.

The victim Maxwell Awetor, a resident of Ahinsan Estate had reportedly gone to visit a friend around the area when the incident happened, Starr News sources have said.

According to an eyewitness, two suspected armed robbers accosted the deceased soon after he entered his friend’s house and opened

“I was sitting in this lotto kiosk and saw some two men riding a motorbike. One got down and entered the house, moments later we heard a loud sound. We initially thought a gas cylinder had exploded but nobody came out of the house.

“Not long after I saw the man come out of the house with a pistol stuck around his waist holding a brown envelope. But before I could raise an alarm for help he jumped onto the motorbike and sped off. I and two others went to the house and saw the deceased in a pool of blood. We rushed him to the hospital but he, unfortunately, died at the Kumasi South Hospital,“ the eyewitness recounted.

The body has been deposited at the morgue.