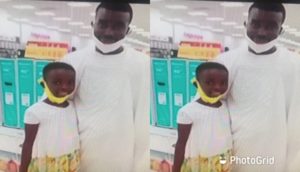 A 9 years old girl is said to have been sadly killed and used for a ritual by his own biological father in a bid to gain more powers to run his church.

The members of Heavens Kingdom Palace Ministry International have been thrown into a state of dilemma by this sad development as many have promised not to step a foot from now on in the church.

We have also heard that the case was identified to the Nkoranza Police in the Bono East Area and that the pastor has yet to be arrested.