Home / ENTERTAINMENT / Dampare is right, but he should not be addressing diplomats – KKD 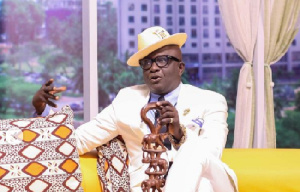 Dampare is right, but he should not be addressing diplomats – KKD

Kwesi Kyei Darkwa, alias KKD has commented on the Inspector-General of Police’s May 20th letter addressed to the British High Commissioner, Harriet Thompson.

Whiles he holds that IGP George Akuffo Dampare was right to respond to the issue the ambassador commented on, he quizzed whether it was the place of the Police chief to respond to ambassadors.

“Whatever the IGP said was true but should the IGP be addressing the emissary of the head of another country?

“I think the answer is no. I think that should be coming either from our presidency or better still the appointee of our president to deal with emissaries of other countries, that is the Minister of Foreign Affairs,” he submitted on the June 1 edition of the GTV Breakfast show.

He stressed that while the tweet by the ambassador could be classified innocuous, “it was also irksome” and provocative forcing the IGP to defend his office and the country.

“Everything he has written in that letter legally, commonsensically and diplomatically is true,” KKD added.

Inspector-General of Police George Akuffo Dampare has been in the news for the better part of Tuesday, May 31, 2022, after a four-page letter signed by him was published by the Ghana Police Service.

Her tweet of May 17, 2022, read, “Oliver Barker Vormawor, convener of #FixTheCountry movement arrested again, I understand for a motoring offence on his way to court. I’ll be interested to see where this goes.”