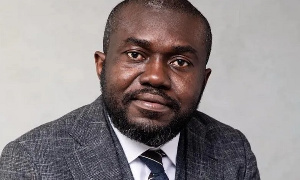 Dampare’s letter was written for him – Barker-Vormawor alleges

Convener of the #FixTheCountry Movement, Oliver Barker-Vormawor, has questioned the rationale behind a response issued by the IGP to the British High Commissioner over comments she made regarding his arrest.

According to him, the IGP’s response was quite unnecessary considering the issue was a diplomatic issue and should have been handled by the Ministry of Foreign Affairs.

In a post on Facebook shared on May 31, 2022, Barker-Vormawor said that the IGP would have been sacked in any country for this blunder but same might not apply in Ghana. He further suggested that the response was possibly written by government officials for him to append his signature to.

“Who the Gods want to kill, they first make mad. Dampare paaa. Eih so what went wrong with this man? Ghana paa is a concert country ooo. Herh!” another post shared by Barker-Vormawor read.

The British High Commissioner, Harriet Thompson, in a tweet shared on May 17, bemoaned the arrest of Barker-Vormawor who was arrested for a road traffic offense, saying that she was interested in the outcome of the convener’s arrest.

Responding to the high commissioner’s statement, Inspector General of Police (IGP) George Akufo Dampare, in a letter to the diplomat, said her tweet was made from a prejudiced or unapprised position.

“Ordinarily, the Ghana Police Service would not have responded to comments such as yours, obviously made from either a biased or uninformed position. However, we have learnt from previous, painful experience that it has not been helpful to ignore such misguided, unwarranted, and biased comments intended to tarnish the reputation of the Ghana Police Service and that of our Country,” portions of the letter read.

Tags Dampare FOR HIM LETTER WAS written