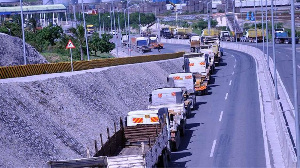 The heat from Kenya’s campaigns ahead of the August 9 General Election is affecting the flow of goods on the Northern Corridor, with Tanzania benefiting from the windfall as more cargo destined for the Great Lakes region is diverted to the Dar es Salaam port.

With memories of the 2007/08 post-election violence that disrupted transport on the corridor still fresh and a $63 million compensation award ordered by a Nairobi court still pending many importers, especially Ugandans and Rwandans, are opting for the Central Corridor.

Due to this cargo flight, transit volumes through the Dar es Salaam port to the Central Corridor have recently recorded significant growth as Mombasa registers plateaued or declining volumes of goods on the northern route.

According to the latest Mombasa Port Corridor Community Charter report, transit volumes through the Dar es Salaam port grew by 21 percent in 2021 while those through the port of Mombasa declined 6.2 percent in the same period.

The decline is blamed on a move by importers in Uganda, Kenya’s largest transit market in the region, to divert more cargo to Dar es Salaam. Rwandans, too, diverted imports, especially during the political impasse with Uganda that saw a three-year blockade of the common Gatuna/Katuna border point on the Northern Corridor.

The new report shows that Uganda-bound cargo reduced by 5.7 percent in 2021 while that going to Rwanda had dropped by 56.7 percent. In 2022, experts predict further decline for the Mombasa port, even as the government continues to upgrade it and offer lucrative incentives to users.

The port operators are reassuring their customers of security on the route, amid heightened campaigns for Uhuru Kenyatta’s succession that pits his rival-turned-ally former prime minister Raila Odinga of the Azimio la Umoja coalition against his ally-turned-foe, Deputy President William Ruto, leading the Kenya Kwanza alliance.

Aware of the shift in fortunes, the Kenyan government has moved to ensure increased efficiency and cargo-handling capacity in the Mombasa port after Japanese contractor, Toyo Construction, which has been constructing a second container terminal, completed the project. The government has appointed a Swiss firm, Mediterranean Shipping Company (MSC), to run it.

The completion of this terminal gives the port an additional annual capacity of 450,000 twenty-foot equivalent units (Teus), bringing the total capacity to 2.1 million Teus.

However, the political temperatures have gone a notch higher this past week after the two frontrunners named their running mates from President Kenyatta’s backyard in Central Kenya, a battleground in the hunt for votes. The region largely supports Dr. Ruto, but Mr Odinga seemed to gain some ground after naming veteran politicians from Kirinyaga County and former Justice Minister Martha Karua as his running mate. Dr. Ruto has chosen Rigathi Gachagua, the MP for Mathira Constituency in the neighboring Nyeri County.

This has set the stage for a bruising battle in the State House race, with some neighbors and the US having jitters about a possible contested presidential election result. Dr. Ruto’s camp has often alleged that there is a plan by state agencies to rig the polls in favor of President Kenyatta’s preferred candidate, Mr Odinga.

In March this year, top US spy agencies expressed concerns about the uncertainty around the Kenyan election, warning that any disruptions will not be healthy for regional stability. Kenya, a strategic ally of the US in the region, faces the test of stability in a hotly contested presidential election at a time it has emerged as a peace broker in the conflicts in Ethiopia, South Sudan, and the Democratic Republic of Congo.

Kenya has invested heavily in infrastructure, including the standard gauge railway and two inland ports to facilitate the transport of cargo from Mombasa port to Uganda, Rwanda, and the Democratic Republic of Congo. This has also seen Kenya refurbish its old railway to transport cargo to the Malaba border with Uganda.

A recent report titled Worldwide Threat Assessment, which presents a consensus among 17 US intelligence agencies, said that East Africa probably will see new bouts of conflict … “as the region becomes increasingly strained by the civil war in Ethiopia, power struggles within the transitional government in Sudan, continued instability in Somalia, and a potentially contentious election in Kenya.” The declassified 31-page document came at a time the Ugandan Cabinet and legislators were voicing their concerns about the rising political friction in Kenya, which has driven up the cost of living along the Northern Corridor due to hesitancy by importers and transporters to use the route.

The leaders called on their government to put in place a robust contingency plan for factors that could drive up commodity prices, the key of these being the Kenyan elections.

Lessons from the past

Kenya is the main route for imports into Uganda, with oil from international sources delivered to Eldoret in the North Rift, where other Northern Corridor countries of Uganda, South Sudan, Rwanda, and eastern DR Congo pick it up for transportation to their markets.

Uganda has learned from the 2007 polls when post-election violence in Kenya led to the blockage of fuel imports and rail-bound cargo from Mombasa after sections of the railway track were uprooted by rioting youth. “Uganda should facilitate imports and exports through the Central Corridor and deploy more water vessels to connect to the Central Corridor,” said Jane Nalunga, executive director of the Southern and Eastern Africa Trade Information and Negotiations Institute, Uganda.

Port and rail service providers in Tanzania and Uganda in early March signed a freight forwarding agreement with Roofings Group of Uganda to increase the volume of cargo through the Dar es Salaam port. Uganda Railways Corporation Chief Operating Officer Okachi Abubakar said 70 carriages had been flagged off from Uganda to Dar, and two ships would facilitate transportation of the cargo through Lake Victoria.

While there has not been major election-related violence in the current campaigns, the ghosts of the 2007/8 violence continue to haunt importers and transporters on the Northern Corridor. In 2018, a Kenyan court ordered the government to pay 16 Ugandan and Rwandan companies $63 million as compensation for trucks and goods lost during the post-election chaos.

Michelle D. Gavin, a former US ambassador to Botswana, earlier told The EastAfrican that the August elections will be among the most consequential political events in Africa in 2022.

“In a turbulent region, Kenya’s stability, economic muscle, and diplomatic leadership are more essential than ever before,” she said. “An electoral process that takes a wrong turn could threaten the country’s capacity to continue playing a pivotal regional role going forward.”

US Secretary of State Antony Blinken, during his first official visit to Kenya last year, urged the government, opposition parties, and civil society to work together to ensure safe and stable elections that reflect the will of the Kenyan people in the elections.

Mr. Odinga, who is also the African Union High Representative for Infrastructure Development, on Wednesday visited South Sudan and held talks with President Salva Kiir before commissioning the 3.6km Freedom Bridge, a symbol of trade connectivity between Juba and the rest of the region.

“We discussed a wide range of issues concerning our two countries,” President Museveni wrote on his Twitter handle.

Mr. Odinga also tweeted: “We walked down memory lane to discuss the shared history of our countries aimed at forging stronger ties moving into the future.” Whether the Kenyan leader’s tour to the two EAC member states will help calm the jitters remains to be seen.

The Northern Corridor has in the past year witnessed increased competition from the Central Corridor in cargo throughput to landlocked Rwanda, Burundi, and eastern DRC, with indications of higher costs and transit time through the route, attested to by a decrease of cargo destined to Uganda.

The latest Mombasa Port Corridor Community Charter report warns that the corridor’s performance could be worsened by the electioneering period. Gilbert Langat, the Charter’s chairperson and CEO of the Shippers Council of East Africa (SCEA), said they are engaging partners on the corridor to assure them of the safety and security of their cargo and vehicles to build confidence.

Shippers have also cited high penalties charged by the port, detention charges, delays in the railing to the Inland Container Depot in Nairobi, delays in offloading and return of empty containers, and unstable automated systems by agencies as other reasons driving them to the Central Corridor.

SCEA reports indicate that 80 percent of imports through the port of Mombasa are handled through bill of lading (TBL) due to an unpredictable operational environment resulting in an additional cost of between $100 and $150 per Teu. A through bill of lading allows for transportation of goods within domestic borders and through international shipment.

These charges are estimated to have cost the business community between $1 million and $1.5 million, paid to the shipping lines and ship agents in 2021. The detention cost accruing before containers cleared from the ICDN was estimated between $190,000 and $350,000 weekly, due to delayed railing, system downtimes and equipment breakdown.

Shippers through the port of Mombasa in 2020 paid an average of $3,600 as storage penalties, but in 2021 the cost declined 33 percent to $2,400, a decline the Kenya Ports Authority attributes to “progressively structured engagements between the lead agencies and the private sector led by SCEA”.

Despite the decline in transit cargo volumes through Mombasa, the port still registered a positive performance in 2021, the impact of Covid-19 and the global economic crisis notwithstanding.

Meanwhile, Tanzania’s “softened” borders with Kenya have reduced non-tariff barriers in the one year of President Samia Suluhu’s reign. Data from the Kenya National Bureau of Statistics (KNBS) shows that Tanzania’s exports to Kenya doubled in just 10 months after the Samia takeover. In the John Magufuli era, the two countries engaged in many trade rows, with Tanzania playing protectionist while imposing restrictions on trade with Kenya, against the EAC Common Market rules.

KNBS’s Economic Survey 2022 shows that the impact of the Covid-19 pandemic notwithstanding, Kenya imported more goods from Tanzania in the past year than before.

In May 2021, President Samia and Uhuru Kenyatta agreed on targets, including eliminating 14 identified non-tariff barriers in six months.

After President Samia’s visit, President Kenyatta directed the country’s agriculture officials to allow Tanzanian maize imports that had been barred. He also directed that work permits be harmonized and relaxed the policy on business visas for traders. Tanzania exported more food to Kenya in 2021.

“Kenya’s imports from Tanzania nearly doubled from Ksh27.9 billion ($242.6 million) in 2020 to Ksh54.5 billion ($473.9 million) in 2021, partly attributable to an increase in imports of maize and rice from this country,” said the report released by Treasury Cabinet Secretary Ukur Yatani earlier this month.

The rise was due to an increase in domestic exports of tea, cut flowers and coffee to DR Congo, and soap to Tanzania. Uganda remained the largest export market for Kenyan products, according to the report, trade disputes notwithstanding.

“The value of exports to Uganda increased from Ksh72.2 billion ($627.8 million) in 2020 to Ksh91.7 billion ($797.4 million) in 2021, largely driven by an increase in domestic exports of cement clinkers, palm oil, flat-rolled products of iron and non-alloy steel and re-exports of machines tools for drilling, boring sinking, milling, threading or taping,” the report states. “As a result, Uganda continued to be the country’s key export destination, accounting for 12.3 percent of total export earnings. Increased demand for sugar and milk led to the increased expenditure of imports from Uganda.”

In the period, exports to South Sudan declined 26 percent to Ksh17.1billion ($148.7 million), resulting in a reduction in domestic exports of food supplements, and re-export of dried leguminous vegetables.

Previous Avanti Communications and Free in Senegal sign landmark agreement to build and host new HYLAS 4 satellite gateway in Senegal
Next VIDEO: ‘There might be a coup in Ghana’ – Owusu Bempah prophesies