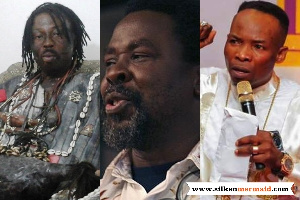 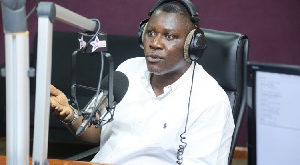 • According to Kwaku Bonsam, he killed TB Joshua after engaging him in a spiritual fight

The founder and Leader of Alive Chapel International, Archbishop Elisha Salifu Amoako, has lashed out at controversial Ghanaian fetish priest, Nana Kwaku Bonsam, for claiming he killed Prophet Temitope Balogun (TB) Joshua a week to his 58th birthday after engaging him in a spiritual battle.

Kwaku Bonsam following the death of TB Joshua on Saturday, June 5, 2021, called for jubilation saying, “TB Joshua tried to kill me spiritually. He said he was going to fight me in the spiritual realm after I accused him of killing late President John Evans Atta Mills. When I said this many people came after me for attacking a man of God.”

“I gave him a 9 to 10-year ultimatum that I will show him that only God can judge me on this earth. We went into a spiritual contest and I won that battle.”

But reacting to Kwaku Bonsam’s statement, Archbishop Salifu Amoako without mincing words described the fetish priest as a frustrated liar who in reality has no power to hurt a fly.

“Kwaku Bonsam cannot kill even a mosquito. He is a frustrated and stranded liar, tell him I said that,” he fumed.

While calling on the public to rubbish Kwaku Bonsam’s claims, Archbishop Salifu Amoako described him as an attention seeker whose statements deserves to be treated with contempt.

“He wants attention and no attention will be given him. I Salifu Amoako say he cannot kill a cat let alone kill TB Joshua. The man is just after attention and he wants to attach himself to the death of TB Joshua. I will urge the public to ignore him because he is a liar who is incapable of killing a man of TB Joshua’s status,” he said.

According to the Archbishop, stress was the major contributor to JB Joshua’s death which is an associated risk with being a man of God.

“Men of God don’t rest as they continue to risk their lives for people. TB Joshua since he started God’s work never took rest. Just one person touched Jesus and he stopped everything he was doing a told the people around him that ‘a virtue has left me.’ Just one person touched Jesus for healing and he said he had lost strength, so can you imagine what TB Joshua went through laying his hands on multitudes throughout his lifetime. The body naturally breaks down when it is overstretched. It is not Kwaku Bonsam who killed TB Joshua,” he stated.