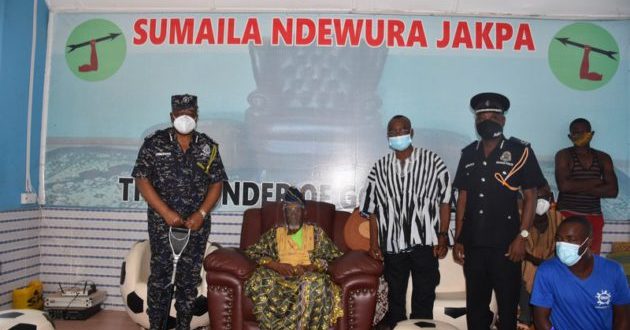 The Inspector General of Police (IGP), James Oppong-Boanuh, has cautioned citizens of the Savannah Region to desist from mob justice.

He made this remark on Wednesday, August 5, when he paid a courtesy call on the Overlord of the Gonja Kingdom, Yagbonwura Tuntumba Boresa.

The IGP also appealed to the people to ensure peace at all times, including during the upcoming elections.

“Let me thank the Savannah Regional Minister for supporting the police administration which led to the arrest of some of the suspects connected to the lynching of the 90-year-old woman at Kafaba.”

Responding to an appeal by the Yagbonwura and the Savannah Regional Minister for more police posts in the Region, the IGP assured them the police administration will establish more posts across the country.

The Regional Minister, Adam Salifu Braimah, on behalf of the chiefs and people of the Region, commended the efforts of the police administration in ensuring peace in the Region.

He indicated that but for the police, the Kafaba case would have been more serious.

“The Region is grateful to you and your men for the swiftness in responding to events in the past that compromised security.