Home / POLITICS / ‘Does he think I’m at the beck and call of NDC, I’m Speaker for Ghana’ – Bagbin on Sammy Gyamfi attack 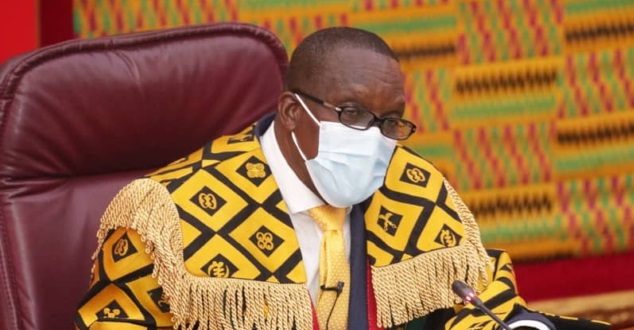 ‘Does he think I’m at the beck and call of NDC, I’m Speaker for Ghana’ – Bagbin on Sammy Gyamfi attack

Speaker Alban Bagbin has told Class Media Group’s Accra100.5FM, Class91.3FM and CTV in an interaction scheduled for simultaneous airing on Monday, March 15, 2021 on all three channels that he does not belong to any political party now that he occupies the position of the third-most powerful person in Ghana.

The longest-serving legislator in Ghana’s political history, after a rancorous Speakership poll, ascended the position a little over two months ago despite his party, the main opposition National Democratic Congress (NDC) having lost the December 7, 2020 presidential election and splitting the 275 seats of Parliament with the governing New Patriotic Party (NPP).

The former Nadowli-Kaleo MP, who had been a lawmaker since the almost-three-decade-old fourth republic of Ghana, recently came under attack, along with Minority Leader Haruna Iddrisu and Minority Whip Muntaka Muburak, from the National Communications Officer of the NDC, Mr Sammy Gyamfi, after the house passed some contentious ministerial nominees of President Nana Akufo-Addo despite express directives from the Functional Executive Committee of the party, that those ministers-designate be rejected for various reasons.

In a social media harangue, Mr Gyamfi said the NDC no more regarded Mr Bagbin as an NDC Speaker, even though he attained the position on the party’s ticket.

The Facebook tirade on Thursday, March 4, 2021, accused Mr Bagbin and the leadership of the Minority Caucus, of betraying the party by approving the nominees.

“Some have sold their conscience but ours is intact. And we can work together to rebuild the party from the ashes of 3 March 2021, which I call ‘Black Wednesday’ – our day of self-inflicted shame”, Mr Gyamfi said in the post, adding: “This is the time for us to insist on the right changes in the leadership of the NDC group in Parliament or forget about them completely”.

To him, “the current leadership have lost their moral authority to lead and are not fit to sit on the front bench of the NDC side of the house”.

“More importantly”, he noted, “it’s about time we understood that we don’t have any NDC Speaker of Parliament”.

“No, we don’t!” he stressed, in reference to Mr Bagbin, complaining: “We have a Speaker who rode on the back of the NDC into office to pursue his own parochial agenda and nothing more”.

“You trust them at your own peril”, he warned members and supporters of the NDC.

Passing a brief comment about the attack on him during a courtesy call by CMG, at which meeting he spoke about the need to strengthen the capacity of the media, Mr Bagbin said: “Recently in the media, on social media, in particular, you have heard the blistering attack on me when I did not play any role apart from presiding [over the business of the house]”.

“Because I say I belong or came from a party, does he [Sammy Gyamfi] think I’m at the beck and call of the party?” he asked.

“And, so, if you sit down and look at me and think that maybe you were my girlfriend before [and, therefore] I should give you an advantage over another who I’ve never met, please, then don’t come to me; you won’t get it. Let’s finish; after work, we can do that business together. Not when I’m working. That’s my nature; that’s how I’ve been up to this time and, so, it’s unfortunate that these things are happening”, he said.