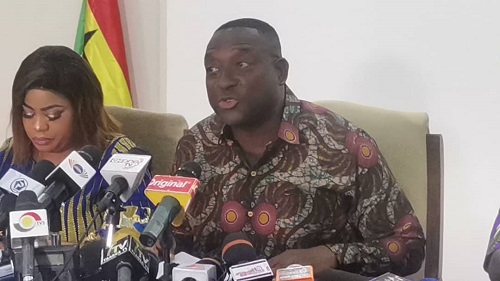 The party believe the bill will help  mobilize more revenue for the government while reducing existing debt situation in the country.

The National Communications Director for the NPP Yaw Boaben Asamoah said this during a press engagement on the Electronic Transaction Levy bill which was held in Kumasi on Friday February 18, 2022.

Mr Boaben Asamoah during the engagement noted that the implementation of the E-levy will help generate internal revenues devoid of high rate interest which will be channeled into productive sectors in the economy.

He said the huge mismatch between revenue generation and infrastructure needs was not sustainable if the country was to accelerate its economic transformation agenda within the shortest possible time.

He however challenged the Minority in parliament to suport the policy if indeed they have good intentions for the future of Ghana.

He explained that the proposed e-Levy when approved  will  transform the Ghanaian economy and in effect protect the vulnerable.

The e-levy which was introduced by the incumbent government in its 2022 budget is to be rolled out after parliament’s approval ensuring that Ghanaians are taxed on their electronic transactions.

A 1.75 percent charge is to be deducted on every 100 cedi MoMo transaction made and also on all bank transfers.

The e-levy has been met with strong opposition from the Minority in Parliament as they have vehemently kicked against its implementation.