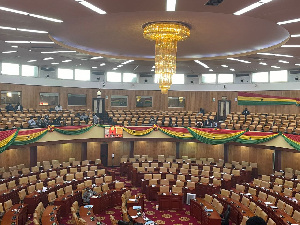 E-levy: Parliament adjourned to next year

Peace FM’s Parliamentary Correspondent, Emmanuel Akorli reports that, the Majority grouping moved a motion for the adjournment which was seconded by the Minority Leader, Hon. Haruna Iddrisu, thereby causing parliament to adjourn sitting.

The House will resume sitting on the 18 of January.

Parliament, which has been strongly divided for some weeks now, experienced another strange scene in the Chamber just before the final vote on the controversial Electronic Transfer Levy Bill, also known as e-levy, was expected to be passed on Monday night.

Proceedings came to an abrupt end when a brawl broke out between some Minority Members of Parliament (MP) and their colleagues from the Majority, leading to the failure of the House to approve the controversial bill.

Earlier, the Minority grouping had angrily challenged the decision by the House to consider the e-levy bill under a certificate of urgency following the recommendation by the Finance Committee for the House to do so.

But what escalated the already tensed atmosphere and led to the subsequent chaos was the decision by the First Deputy Speaker of Parliament, Mr Joseph Osei-Owusu (who was then the sit-in Speaker), to exercise his original vote in his capacity as a Member of Parliament during a division to approve the Bill.

This did not sink well with an incensed minority grouping, who questioned his decision to vote after presiding over proceedings.

Ignoring their protests to refrain from taking part in the voting process, Hon Joe Osei-Wusu decided to leave proceedings in the hands of the Second Deputy Speaker, Andrews Asiamah Amoako, so he will not be disenfranchised.

According to him, once a division had been called for by the Minority, he reserved the right to exercise his vote as an MP for Bekwai.

His action drew the ire of about 15 Minority MPs who in a bid to register their displeasure to what they considered as an illegality, advanced from their seats towards where the Clerks sat and gesticulated wildly at him.

But the timely intervention of the security detail in the House, prevented the sit-in Speaker from being pummeled, as he was whisked away to safety. The resultant action culminated in exchange of fisticuffs among some Majority and Minority MPs while some officials of parliament tried to protect the Speaker’s seat and the mace of parliament from being attacked.

Proceedings were then brought to a sudden halt on Monday.

Adjourned Till Next Year

The House was therefore expected to reconvene today (Tuesday) in pursuit of a resolution as to whether the E-Levy should be considered under a certificate of urgency or not, but that was not to be.

The Majority Leader, Hon Osei Kyei Mensah Bonsu had expressed optimism the House will approve the Bill, since it forms an integral part of the 2022 budget presented by Finance Minister, Ken Ofori-Atta.

However, according to PeaceFM’s Emmanuel Akorli, consensus could not be reached during Tuesday’s sitting, thus leading to the subsequent adjournment.