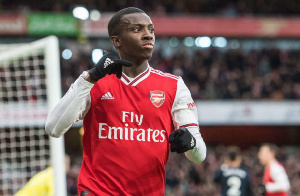 Those were the words of Arsenal boss Mikel Arteta in October when he was pressed on the future of Eddie Nketiah.

The 22-year-old academy graduate had been fading into the background at that point, reportedly turning down Arsenal’s contract offer – his deal runs out at the end of the season – due to a lack of game time.

But the forward is currently enjoying a mini-renaissance, and the flashes of promise which he has shown in recent weeks culminated in the 22-year-old grabbing a hat-trick to power Arsenal into the semi-finals of the Carabao Cup at Sunderland’s expense.

There were eyebrows raised when it became apparent from kick-off that it would be Nketiah playing through the middle with 20-year-old Folarin Balogun operating from the left-hand side. There is some merit in the idea that, given Nketiah is schedule to depart the club at the end of the season, he should be playing second fiddle to Balogun in the pecking order.

But Arteta clearly viewed this evening as a sales pitch to Nketiah. Naturally, the Gunners were streets ahead of their League One opposition, and it stands to reason that the forward will not enjoy the same service against Premier League opponents given the gulf in quality isn’t as wide.

However, Arteta’s overarching aim is to assemble an Arsenal side who can regularly enjoy the same level of chance creation that they did against comparative opponents. By persuading Nketiah to extend his stay in north London he seemingly hopes of developing the forward into a player who can replicate these types of performances on a bigger stage.

The contradiction of Nketiah’s game is that, for his undoubted goalscoring qualities, his all-round play needs polishing. On top of that, Arteta’s brand of football requires a high level of technical excellence, making Nketiah’s ragged, often unrefined style of play stand out like a sore thumb whenever he’s been given the nod.

The truth of the matter, however, is that is an Arsenal side currently lacking a bona fide goalscorer. In the absence of Pierre-Emerick Aubameyang, the Gunners are reliant on Alexandre Lacazette to lead the line. The Frenchman’s link-up play is a joy to behold at times, but he typically does his best work further away from goal.

It contrasts starkly with Nketiah’s game. Strikers are often encouraged to play between the width of the goalposts by managers, and no player personifies that phrase more than the 22-year-old. Indeed, of the 18 goals he has netted in an Arsenal jersey, only two have come from outside the width of that area.

Pure goalscorers in football are a dying breed in an era of increased athleticism and technical proficiency. Either by chance or design Arsenal have sculpted their own in Nketiah. It’s no wonder Arteta is reluctant to bid him farewell.

This article was originally published on 90min as Eddie Nketiah shows why Mikel Arteta is desperate to keep him at Arsenal.

Why Felix Afena Gyan was part of Ghana’s AFCON squad