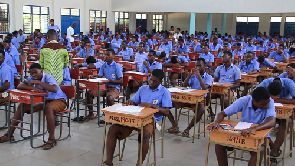 A teacher [name withheld] in one of the Senior High Schools in the Eastern region has been interdicted for dictating answers to students in the ongoing West African Senior Secondary School Certificate Examinations(WASSCE).

According to the Director-General of the Ghana Education Service, Professor Kwasi Opoku-Amankwa, the police is conducting further investigation into the incident whilst his outfit also does a similar investigation.

“An unfortunate incident which maybe has come to the attention of the media is that in one of the schools in the Eastern Region, a teacher was found dictating something on his phone to students. The school officials and WAEC officials immediately reported him to the police,” the GES boss said on an Accra based radio station

“Am told that he has been given bail but I have asked that he should be immediately interdicted, whilst we investigate the issue”, he emphasized.

He declined to mention the name of the school when pushed to the wall by the host of the show, but said that the police is investigating whilst his outfit also does a similar one.

On his impression about the WASSCE so far, he said “so far on the rounds it’s been very interesting. Generally the schools that we go, the students have comported themselves.”

“But ours is a formal way of going rounds; sometimes you need to have a certain eye or third eye to see some of the things”, he added.

Over 313,000 students are writing this year’s WASSCE exams across the country.