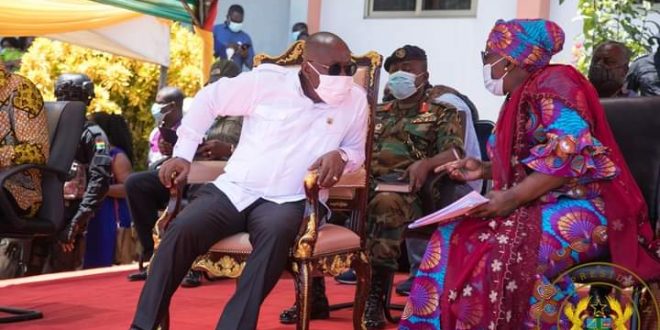 Mr. Mahama while addressing a meeting with the Ghana Association of Assembly Members (GAAM) at his office in Accra, observed that not only do Assembly members attend to the day-to-day needs of the people, but they also serve as community development agents.

He, therefore, reiterated his pledge to tailor capacity building programmes to improve for Assembly members and also pay them monthly allowances to motivate them.

However speaking at a sod-cutting ceremony of a project under the Ghana Secondary Cities Support Program (GSCSP) in New Juaben South Municipality of the Eastern Region by President Akufo-Addo who is on working tour to in the Region, the Local Government Minister explained that “I understand the former President, John Mahama met with the GAAM which is not an official association of assembly members to start with and he promised that when he wins which is not going to be the case he is going to pay assembly members a monthly allowance or salary”.

She continued “to start with, the association that he met tried to organize when he was the President and they were prevented because they were told that there is a recognize assembly members association that is the National Association of Assembly Members of Ghana (NALAG), they prevented them, the New Patriotic Party (NPP) is democratic, we have allowed freedom of association and now the NDC is meeting them instead of (NALAG)”.

She stated that “I want to tell you that, John Mahama’s promise to pay assembly members was in their manifesto in the 2012 elections but he didn’t do anything about it. Now they have no argument against the bravest performance in decentralization and local development, so they are now promising ‘rooftop promises’ that they cannot offer”.

The Minister further added “Mr Mahama was not able to pay assembly members about 10,000 in number, nurses and teachers allowances, so would you expect him to put 10,000 assembly members on the payroll. He knows it is impossible, the real situation is that the way the decentralization scheme has been designed, they are like a board of the assembly and are not a full-time employee”.

Speaking on the Construction of the Nsukwao Basin Drainage Improvement (NBDI) under the Ghana Secondary Cities Support Program (GSCSP),the Minister for Local Government said, the Program has been designed to deliver urban development management and services in 25 Participating Municipal Assemblies across the country. The Program is a USD100 million credit facility based on the World Bank’s Program for Result (PforR) Design, a Performance-Based Grant System.

The Minister Said, “the New Juaben Municipal Assembly has identified flooding as a major risk to Nsukwao, Zongo, Two Streams, Abogri and other communities within the Municipality. Nsukwao has since 2016 recorded the highest flooding incident which has rendered most residents homeless.

With this intervention, the solution is to deliver a storm drain that will minimize flooding in the identified communities at the cost of GHS 15,811,145.00 and packaged into seven (7) lots. It will involve installation of four (4) storm water surface detention ponds distributed along the Nsukwao River, flow facilities, channelization and streambank stabilization, concrete pipes and culverts and two access roads. It is our fervent hope that this project will make flooding history in New Juaben and help restore enhance livelihoods of the residents in the Municipality”.
She said the main goal the Ghana Secondary Cities Support Program (GSCSP), is to improve urban management and basic urban services in the 25 participating Municipal Assemblies.