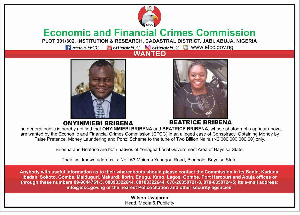 Pastor Onyimiebi is the Chief Executive Officer of Baraza Multipurpose Cooperative, a Ponzi scheme based in Bayelsa.

According to the EFCC via its verified Facebook page on Thursday, June 9, the couple is said to have defrauded unsuspecting Nigerians the sum of N2 billion.

A statement about them by the commission’s head of media and publicity, Wilson Uwujaren, reads:

“The general public is hereby notified that Onyimiebi Bribena and Beatrice Bribena, whose photographs appear above are wanted by the Economic and Financial Crimes Commission (EFCC) in an alleged case of conspiracy, obtaining money by false pretense, money laundering, and Ponzi scheme to the tune of Two billion Naira (2,000,000,000,00) only.

“Bribena and Beatrice are both natives of Yenagoa Local Government Area of Bayelsa state.

A report by PM News claimed that Bribena is a pastor at Christ Embassy Kumasi 1, Ghana, but fled Nigeria in 2021 after failing to pay investors their return on investment (ROI).

The publication added that Bribena’s disappearance triggered protests in Yenagoa, the state capital.

However, the pastor had alleged that some staff of the cooperative compromised its systems by defrauding the organization of more than N300 million.

Even more, the cleric said the organisation was carrying out a forensic audit to enable it to pay the backlog of unpaid surpluses to the investors and members.