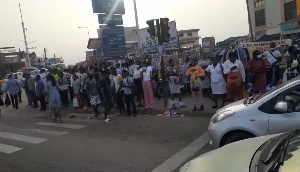 The strike action is over taxes on fuel prices

Ride-hailing services are doing brisk business due to the strike

The effect of a sit-down strike by a coalition of Commercial Transport Operators has started biting across parts of the capital with hundreds of people stranded at bus terminals and bus stops.

According to a number of social media accounts, the order issued by the Joint Association of Port Transport Unions, (JAPTU) Ghana was being partially observed by operators much to the inconvenience of passengers.

According to some Eye Witnesses that GhanaWeb spoke to, commercial vehicles are operating normally especially in areas considered as outskirts, whereas the strike is on full-time in other places.

Photos shared on Twitter show people lined up along the streets at Lapaz, a suburb of Accra, whiles most of the vehicles plying the roads are only private cars and other ride-hailing service providers like Uber and Bolt.

It is reported in other places that commercial transport operators who attempt to ‘smuggle’ passengers are stopped and passengers forced to disembark at mounted roadblocks.

The reactions are also varied, from persons stressing the need for people to own their private cars to those who are happy that Monday has started with the perfect excuse to not go to work.

Below are some reactions from social media

Reason the strike was calledThe Coalition of Commercial Transport Operators via a press statement last week announced the fuel price-related strike action as part of their efforts to force the government to remove five taxes contained in the 2022 budget.

The five taxes and levies are- the Price Stabilization and Recovery Levy, the Special Petroleum Tax, Energy Sector Levy, Energy Debt Recovery Levy, and the Sanitation and Pollution Levy from the pump price of petroleum products.

The statement signed by Mr Ibrahim Musah, Executive Secretary, of the Joint Association of Port Transport Unions, (JAPTU) Ghana, said it expected full compliance with the measure from all its affiliate organizations.

According to him, the strike was the second step in their line of protest, the first being the display of red bands on their vehicles since two weeks ago, starting November 23.

The Ghana News Agency quoted him as saying that the strike was a unanimous decision taken by the various transport associations at a meeting held at the Ghana Trades Union Congress’ building in Accra on November 22, 2021, to protest against the “deafening silence of government in the 2022 budget statement on the removal of the five specific nuisance levies and taxes.”

A/R: One dead, 11 hospitalized in road crash at Akumadan