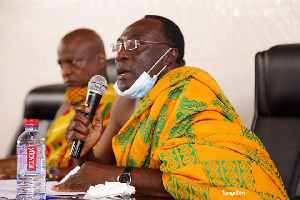 The Volta Regional House of Chiefs has condemned the publishers of History of Ghana Textbook 3 and Golden English Basic 4 for publishing books which cast “derogatory allusions and innuendos at Ewes.”

The books, History of Ghana Textbook 3 by Badu Nkansah Publications, features a song that shows the Ewes identity; Golden English Basic 4 by Golden Publications, displays ‘Efo agrees to prepare the juju for the players’ on page 17.

In a statement issued by the Regional House of Chiefs and signed by its President, Togbe Tepre Hodo IV on Monday, 15 March 2021, the Volta Chiefs noted that their attention has been drawn to the contents of a “book designed for use by lower classes in the current educational structure.”

The house described some of the content of the books which it refers to casting “derogatory allusions and innuendos at Ewes,” as “distasteful and a disgrace to the authors and publishers of the said material intended to educate the younger generation of this country.”

The Regional House of Chiefs said: “We deem it highly reprehensible for those responsible for this offensive publication, to harbor such vile thoughts about their fellow citizens of Ghana in the twenty first century.”

“We therefore unreservedly condemn this singular demonstration of tribal bigotry and prejudice and call on those responsible for the offensive publication, to withdraw the same from circulation and to destroy every part of the offending material.

It urged other “ethnic groups in this country, to condemn such divisive publications which only serve as a recipe for chaos and disunity.”

The house added that: “In the event that this ill-advised publication is discovered anywhere after our demand for the same to be withdrawn from circulation, we hereby serve notice that the Chiefs and people of Ewe ethnic origin, will take appropriate legal measures to ensure that these mischief makers walk on the right side of the law.”

Previous Teenager who stole friend’s ‘sakawa’ ring asked to sacrifice a baby before the ring is removed
Next Deputy Ministerial list out: Okraku Mantey for Tourism, Culture & Creative Arts, Nsiah-Asare for Health – Report