Home / GENERAL NEWS / Eid-ul-Adha: One Killed, Others Injured In Separate Accidents At Zebilla 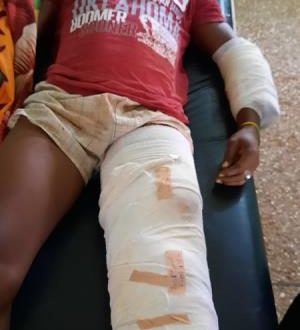 Eid-ul-Adha: One Killed, Others Injured In Separate Accidents At Zebilla

One person has died and others have sustained injuries in separate incidents in Zebilla in the Bawku West District of the Upper East Region on the Eid-ul-Adha celebration day on Friday July 31.

The Zebilla District Police command told this reporter that at about 7:30pm one driver Mohammed Abdul Hamid was driving Nissan Almera with registration No.GT 5091-15 together with one person on board from Zebilla township towards Bawku.

The Police noted that upon reaching a section of the road at Zebilla Natinga, near the Zebilla Chief’s Palace, the driver collided heard on with one 25-year-old Eliasu Azunako who was also riding an unregistered TVS motorbike from the opposite direction.

According to the Police, Eliasu Azunako who sustained multiple fractures and injuries was rushed to the Zebilla government hospital for treatment but was later referred to the Bawku Presbyterian hospital at about 11:00pm for further treatment.

He passed on Saturday, August 1.

The police said the driver Mr. Mohammed Abdul Hamid has since been detained at the police station for further investigations.

Meanwhile, reports reveal that other cases of accidents have also been recorded within the town on the same Friday Eid celebration.

Three other persons were reportedly admitted at the Zebilla hospital with several degrees of injuries and fractures.