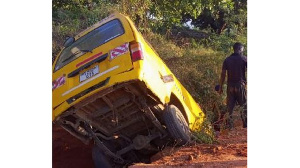 Eight children and two adults suspected to be a teacher and their driver have died in an early morning accident in Mikindani, Mtwara.

Though the Police is yet to confirm the cause and circumstances of the accident, the van is said to belong to King David Primary School in Mikindani

The bus, according to pictures that The Citizen has seen, veered off the road and plunged into a ridge leaving several children dead and injured.

Several children injured in the accident were seen lying by the roadside after rescuers came to their aid.

In another development, President Samia has sent a message of condolences to the bereaved families and wished the injured a quick recovery.

In a tweet, she wrote: I am saddened by the deaths of 8 pupils of King David primary school and 2 adults that happened this morning in Mtwara- Mikindani after their school bus plunged into a ditch. I offer my condolences to the bereaved, the Regional Commissioner and relatives. May Allah have mercy on the deceased and heal the injured.