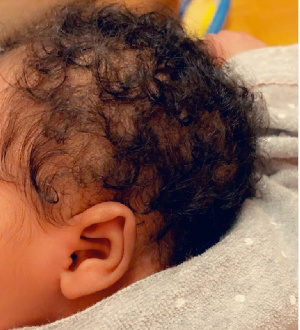 A baby boy who was stabbed to death in a horrific knife attack in Belfast has been pictured for the first time – as police arrested a woman on suspicion of murder.

Liam O’Keefe, who was just eight weeks old, was found dead at a house in the Ardoyne area of the Northern Irish capital on Tuesday night.

Another child, a two-year-old girl, was discovered in a critical condition. She was rushed to the hospital but is now stable.

Police confirmed a 29-year-old woman had been arrested on suspicion of murder and attempted murder. She was also taken to hospital.

She has since been released into police custody for questioning, the PSNI said today.

Last night the father of the children raced back to Northern Ireland from England to be at his daughter’s bedside as she fights for life in hospital.

Relatives of little Liam have paid tribute to their ‘beautiful angel’ after he lost his life in the horrific attack.

One relative sent their prayers for ‘our beautiful cousin who is fighting for her life in ICU’, The Sun reported.

She went on to urge people not to speculate on what happened to let ‘our whole family circle grieve.’

Another loved one said: ‘The family is all heartbroken.’

Police and medics rushed to the house earlier this week, but sadly Liam could not be saved and was declared dead at the scene.

The Police Service of Northern Ireland (PSNI) have launched an investigation into what is understood to have been a domestic stabbing incident in Brompton Park.

He said: ‘It was a very tragic situation which unfolded here in Ardoyne last night.

‘It is my understanding that first responders entered a house, they found two young children very seriously injured and despite their best efforts one child died at the scene.

‘Another child has been taken to hospital and is currently in a critical condition.

‘Our hopes and prayers are that that child will pull through and make a full recovery.

‘Police have arrested a 29-year-old woman, they have commenced a murder investigation also so I think that process has to take its own course.

‘Everybody in the community, their thoughts are with the families that are directly affected by this.

‘It is a tragic situation compounded by the fact that we are dealing with somebody who has died at such a young age.’

‘It is incredibly difficult and will obviously leave a mark on those who are most impacted by it, and all we can do is rally round those who need support at this time.

‘This has been hugely impactful.

‘There were neighbours who assisted and some people who would have witnessed scenes that they shouldn’t have to witness.

‘Ardoyne is a very proud community, it is a resilient community also and I have no doubt whatsoever that they will rally around each other at this very difficult time, they will provide help and assistance for those who need it.

‘I would also just stress just for people to exercise caution and sensitivity in regards to what they would post or share on social media, there is a live murder investigation and people need to be respectful of that process as well.’

A Police Service of Northern Ireland have said they are not looking for anyone else in connection to the incident.

Det Ch Insp Millar from the Police Service of Northern Ireland’s Major Investigation Team said: ‘Police were called to the house shortly after 8pm last night and discovered the injured baby and another injured child in the house.

‘Despite the efforts of the emergency services the baby was sadly pronounced dead at the scene. The other young child was taken to hospital and remains in intensive care.

‘A 29-year woman who was also in the house has been arrested on suspicion of murder and attempted murder and remains in custody at this time.

‘Our thoughts are with the baby’s family, who are being supported by Family Liaison Officers.

‘While our investigation is at any early stage I can confirm that at this stage, we are not looking for anyone else in relation to this tragic death.

‘I would like to thank the local community for the support that they have provided and would appeal to anyone with any information that can assist our investigation to contact us on 101 quoting reference number 1787 27/07/21.’

Previous VIDEO: Nigerian songs that became smash hits because of Tik Tok
Next Andre Ayew to arrive in Barcelona for Al-Sadd pre-season camp after cutting short his holidays