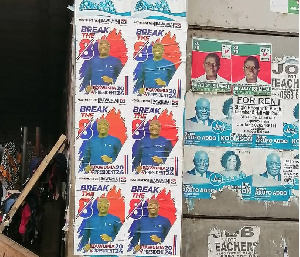 The race for the flagbearership of the New Patriotic Party has already begun, or so it seems. A walk around the Kasoa overhead in the Central Region shows posters plastered on pillars, walls and several other surfaces.

The poster, obviously designed with the governing party colours has the inscription, “Break the 8,” Bawumia 4 President 2024.

It, however, appears the campaign is being championed by support group(s) of Vice President Dr Mahamudu Bawumia, as the base of the poster carries the caption, “Movement for Bawumia.”

Earlier, there appeared to be some form of leadership tussle as names of the Vice President and Trade Minister, Alan Kyerematen popped up as candidates to replace Finance Minister, Ken Ofori Atta for the budget presentation.

President Akufo-Addo eventually settled on Minister for Parliamentary Affairs and MP for Suame, Osei Kyei-Mensah-Bonsu to present the 2021 budget to the house on Friday, March 12.

At the time of the filing of this report, there was no reaction from the camp of the Vice President.