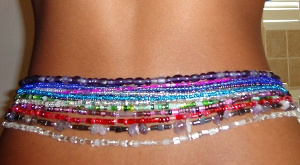 Portia Ofori, Beads Trader at Tema, has explained that in Ghanaian traditional systems, beads depict royalty, while the feminine types make a woman complete, “without beads around the waist a woman is empty”.

Mrs Ofori told the Ghana News Agency in an interview at Tema, that bead wearing had been part of the Ghanaian culture since ancient days; when a child was born, for instance, white beads was tied around the neck, wrist, waist, ankle, and knee as adornment and as sign of victorious entry into the world.

She said in all the ethnic groups in Ghana, beads were used during performance of certain rites such as birth, puberty, marriage, even during the laying in state of the departed.

“Beads are used to welcome you into this world and used to send you off to the ancestral world,” she explained.

Mrs Ofori said beads were also used during installation of chiefs, and traditional leaders use it as part of the royal ornament during festive occasions.

She added that, “beads on the wrist of a married woman made communication between her and the husband interesting, which made the man to love her more”.

Mr Enam Doku, Fashion Designer at Community One, Tema also told the GNA that Chiefs put on beads to show royalty, while Traditional Priests used it to signify power.

Togbe Kwaku Ansong II, a traditional leader also told the GNA at Tema that the rich history of Ghanaian beads dated back to ancient times, when they were first used as the King’s currency for the exchange of slaves, textiles and alcohol.

He said the colours of beads had symbolic meaning; gold refers to the sun and is a sign of wealth and power; green-nature and could induce prosperity and fertility; and brown-the earth and help with stable mood.

The yellow beads bring energy, bliss and joy to women and often associated with maturity and wealth; black evokes protection against harm and gives strengths and power; while the red instils self-confidence to women.

The blue coloured beads are signs of loyalty, purity, honour and truth; pink refers to beauty, compassion, kindness and love; the purple is a sign of royal power and great wisdom; orange instils confidence and charisma; and the white evoke fertility.

Nene Narh Akramakuku a Traditional Ruler at Ankersu also told the GNA that beads do not only play a significant role in the country’s rites and customs, but also in every aspect of everyday life, it serves as means for communication.

He said beads are of the utmost importance among the Ewe and Krobo people when it comes to the passage ceremonies – pregnancy, birth, puberty, marriage and death, and also when it comes to the rites that accompany the installation of chiefs, kings and queens or priests.

He explained that at birth, during the naming ceremony which is performed on the seven day, the baby will receive a bracelet with two or three small beads.

Nene Akramakuku explained that in the Krobo tradition, girls begin to wear waist beads offered by their mothers when coming of age; this marks their passage into womanhood initiation ceremony, known as “Dipo” in Krobo.

The custom is that in preparation for her public unveiling, every girl is adorned with beads around her neck, ankles and waist. The beads around the neck are carefully chosen to convey information to her potential suitors, such as her family background and wealth, he said.

The waist beads are offered as a token of good luck throughout life. Beads are not only believed to protect the wearer from harm, to heal and rejuvenate, but also as a means to enhance the woman’s confidence in her femininity and beauty.

It is also said that bigger beads could be added when the woman reached her sexual maturity, so that the waist beads could produce a subtle sound to draw the attention of the young men around.

Today, African waist beads are still one of the most common fashion accessories worn by Ghanaian women for their beauty, protection or as a feminine statement.

The waist beads are also used as a watch-keeper’s overweight. Quite simply, since the beads are tied and not adjustable, if they roll up the waist, this is an indication to cut down the small snacking.

Previous SAD VIDEO: ‘She hit me hard on the head with a stick’ – Woman narrates how she was nearly killed by her debtor
Next Election 2024: Bawumia posters emerge at Kasoa