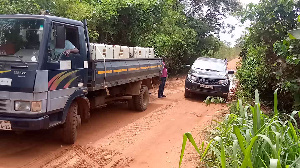 Residents of Osubeng in the Kwahu South Municipality of the Eastern Region have threatened not to vote in the December 7, 2024, general elections if their bad roads are not fixed as a matter of urgency.

According to the residents, the bad nature of the roads in the area has led to many pregnant women having miscarriages anytime they use the Osubeng road to the Prasso area to seek treatment.

They added that if nothing is done about the dilapidated roads, they will not allow anybody to bring ballot boxes to the area for people to vote come December 7, 2024.

“We cannot continue to be voting when our needs are not being attended to as citizens,” they noted.

The residents poured out their frustrations on the midday news on Accra100.5FM.

The chief of the area, Nana Adjei Debrah II for his part explained that they cannot travel anytime it rains in the area.

He said what is supposed to be potholes on the road have turned into manholes.

He added that as a leader, he has spoken with the Member of Parliament for the area, Davis Opoku Ansah, to intervene but to no avail.

He further claimed that the area is a Cocoa production hub in Kwahu South but they do not seem to understand why they have not benefited from the Cocoa roads projects.