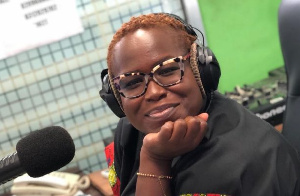 A sad news has hit EIB Network following the death of one of its broadcasters, Naa Ayorkor.

Naa was a popular broadcaster with Takoradi-based Empire FM, a subsidiary of the EIB Network.

Naa reportedly died Monday morning, May 30, 2022, after a short illness.

The cause of her death is not immediately available to this portal.

Until her shocking demise, Naa Ayorkor was the host of the station’s midmorning show, ‘Brunch Mix’.

Her colleagues have been left in a state of shock as according to them, the Takoradi-based female presenter did not show any signs of ailment.

They have since trooped into social media platforms to mourn the late Naa Ayorkor.

Tributes are also pouring in from family members, friends and loved ones.