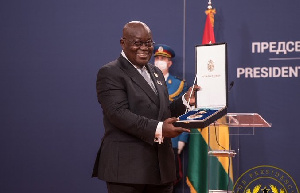 President Akufo-Addo has disclosed that the government has settled the Energy Legacy Debt.

The President made this known during the swearing-in ceremony of the Governing Board of the Public Utilities and Regulatory Commission at the Jubilee House.

Ghana’s energy sector is believed to be plagued with billions of accumulated debt for decades.

This is generally referred to as the legacy debt. This has resulted in the government’s inability to occasionally purchase fuel for the production of power and pay independent power producers leading to intermittent power outages.

“Government has enhanced the financial system through several interventions including paying out the energy legacy debts. Furthermore, negotiations with seven independent power producers…The terms of whose contract retains substantial financial charges on the State are ongoing. All in the view of ensuring that power is affordable for industrial commercial and residential use”, according to President Akufo-Addo.