An obviously peeved Okesse1 has descended on Andy Dosty, labelling the ace radio presenter a fool for sacking him from his show.

Not only did the artiste berate the celebrated disc jockey, but he also mentioned in his social media post that his respect for Andy Dosty has dropped following the treatment meted out to him.

Okesse1 was ordered to leave the studios of Hitz FM over claims he has been rude. A video of the incident circulating on social media captures a masked up Andy Dosty switching from his panelists to the artiste who was reported to have turned up late for the interview.

“Gentleman, how are you?” asked Andy Dosty to which the musician replied, “I’m good”.

The presenter, unsure of the right pronunciation of the name of the musician sought a clarification but that was followed with a suggestion to the musician who was not audible enough to get close to the microphone.

“Ah, massa, it’s everything okay?” a puzzled Andy Dosty asked – a question a soft-spoken Okese1 seemingly did not get the import as it elicited an “oh, why are you asking that question?” response from the musician.

Unhappy about the responses from Okesse1, Andy Dosty walked the musician out of his studio.

The musician has since made social media posts to react to the situation. In his first post which came with the picture of Andy Dosty, Okesse1 said: “He is such a big old fool… I’ve lost so much respect for this guy.”

Suspecting that the act was masterminded to injure his brand, Okesse1 continued: “Andy Dosty, your propaganda set against me will never work. I have God. I just unfollowed you.”

He called on the management of Hitz FM to “deal with such an arrogant pig” while threatening to take legal actions. “I might sue you for this, trust me.”

In a separate post, he said: “If we talk about humility, I know I’m very humble and I respect people… Andy Dosty, I created my own company in California when I was 20… I do music for my fans and Ghana and I’m in to put in my all.. I’ve paused everything to come to your show only to find out you have connived with people to sabotage my career… I’m blessed man can never bring me down… OKESE1 is here to stay and it’s for life. 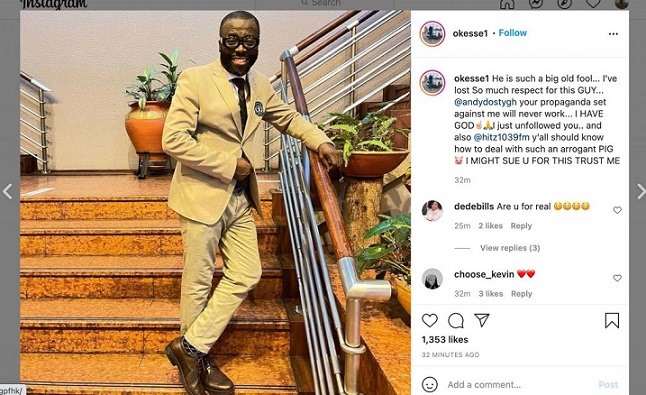 VIDEO: “I will ensure that DJs in Ghana never play your songs” – Andy Dosty challenges Okese1

Funny Face cries as he narrates his encounter with police