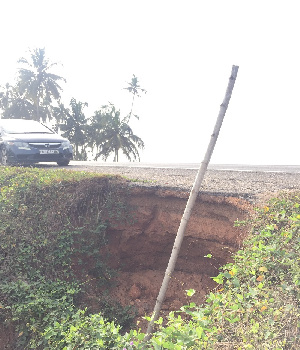 The Cape Coast-Takoradi highway is the main road that connects the Central Region to the Western Region.

It is the main stretch that also connects some portions of the Central region (Cape Coast, Elmina, Komenda), thus the essence of this highway cannot be overlooked.

However, road users are at risk of accidents as a result of a huge hole on a part of the road which is gradually caving in.

The affected part of the road, which is sited at Ahiaboboi, about 1km away from Heritage Beach Resort, is being taken over by erosion.

This is becoming dangerous, as the pedestrian walkway is gradually being washed away.

Some of the pedestrians, registered their fear of the current state of the road as it poses danger to them.

They added that they are forced by the situation to use the main lane instead of the pedestrian walkway.

They told GhanaWeb’s Central Regional Correspondent that with the fast-approaching rainy season, the situation is likely to worsen.

A resident at Ahiaboboi township, Madam Kafui told GhanaWeb that residents have appealed to the Assemblyman but, they are yet to see any action been taken on that.

“It started somewhere last year, myself and my brother informed the Assemblyman about it but something is yet to be done about it,” she explained.

GhanaWeb tried to speak with the Central Regional Director of the Ghana Highways Authority, Mr Mark Okyere regarding the situation but unfortunately, he wasn’t reachable.