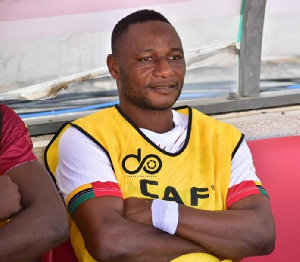 The Ethiopian Football Association has described Ghanaian International, Wahab Adams’ claim that, they approached him to switch nationality as “a joke of the era”.

According to the General Secretary of the Football Association, Bahiru Tilahun, the claim by the former Kumasi Asante Kotoko player has no iota of truth.

Meanwhile, in an interview with Kumasi-based Light FM, Wahab Adams disclosed that there has been talks from officials of the Ethiopian FA to convince him to switch his nationality, following his performance.

“Yes, since joining Wolkite City FC in Ethiopia my performance has been fantastic and that the Ethiopian FA has approached me to naturalise for them and am considering my future,” he stated.

But, responding to the claim in a post on twitter, the Ethiopian FA through its General Secretary vigorously rubbished the report and noted that such decision will never happen under the association.

“I saw from some posts that this guy (Wahab Adams) said as Ethiopian Football Association approached him to play for Ethiopian national team. This is really a joke of era. Never happened, will never happen.”

He further said the player’s gesture poses as “an insult” to the association and therefore, warned Wahab Adams to stop deceiving Ghanaians at large.

Previous Why Ghana will beat Nigeria to Qatar ticket – Don Bortey
Next VIDEO: My husband beats me but I cannot leave him – Woman cries