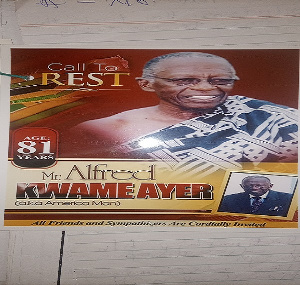 Family chases hospital over disappearance of corpse from mortuary

Authorities and mortuary attendants at the St. Martin De Pores Hospital in the Eastern Region are hot over the disappearance of a corpse from the facility’s mortuary six months ago.

The family of the late Alfred Kwame Ayer, 81 a resident of Odumase-Krobo is outraged over the fact that their relative whose remains were being preserved at the facility pending burial inexplicably vanished from the facility.

The deceased died on the 13th of October, 2021 and his remains were duly deposited at the hospital the same day for preservation. However, to the horror of relatives, the remains of their loved one scheduled to be buried on January, 29, mysteriously vanished from the mortuary.

The disappearance came to light on the 13th of January, 2022, some two weeks and a half weeks before the final burial rites.

Court documents available show the accused persons agreed to “act together with a common purpose to commit crime to wit stealing,” as well as forgery of documents contrary to section 159 of the criminal code 1960 (ACT 29).

Prosecuting, Detective Chief/Insp Dan Apedo told the court that Christopher Teye Mensah on the 10th of January, 2022 failed to act and forged the mortuary fridge number of the deceased in the mortuary record books as well as the date of collection of the said body.

According to the prosecution, the complainant in the case, Mr. George Tetteh was an estate developer based at Agomanya and a younger brother of the deceased.

On the 13th of October, 2021, the complainant deposited his brother’s remains at the mortuary where the accused persons worked with Christopher Teye Mensah to receive the body.

Somewhere in December, 2021, the facility was forced to transfer all bodies to a different fridge in the same mortuary following days of power outage in the Krobo area.

It was established that Christopher Teye Mensah who was in charge of writing the fridge numbers against the corpses, during the transfer of the bodies failed to write that of only the late Mr. Ayer in the official record book of the mortuary.

Prosecution furthered that on the 10th of January, 2022, the complainant, George Tetteh paid the mortuary bills of the deceased at the hospital’s account office and gave the same to Christopher Teye Mensah.

It was discovered that though the complainant indicated January 28th, 2022 on the official receipt issued as the date for the intended collection of the body, Christopher Teye Mensah however allegedly fraudulently changed the date of collection in the record books to 14th January.

It furthered that one of the attendants at the mortuary, Asiedu Godfred subsequently discovered that the remains of the deceased could not be found on the 13th of January, 2022 when he went to the facility and subsequently reported the matter to the administrator of the St. Martin’s Hospital, Mr. Emmanuel Bosompim who is a witness in the case.

Following the report, the management of the hospital conducted a series of checks and head counts of the bodies in the presence of the police, complainant and attendants but the body of the deceased could not be found.

After investigations, it was discovered that the accused persons on the 10th of January, 2022 allegedly conspired to steal the body and have thus been charged with the offence of stealing.

Tags CHASES CORPSE disappearance FAMILY FROM HOSPITAL mortuary OF over