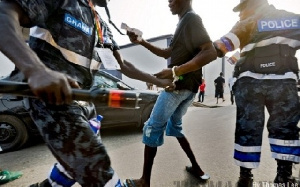 The father of two teenage sisters, who allegedly plotted a fake abduction in order to demand a GHc20,000 ransom from their family at Morso, near Juaso, in the Asante Akyem South District, has expressed shock that his daughters could collude to do such a thing to them.

The two, 16 and 17 years, are reported by adomonline.com to have connived with two other teenage boys of Nigerian origin, hopeful of getting the ransom paid to them before the supposed release of one of the girls.

This was after this daughter is said to have left for Konongo on a mission to retrieve the password for her Mobile Money account.

“My eldest daughter came to me on Wednesday to report that her sister was missing. I then informed my sister of the situation, who told me to report the case.

“While I was preparing to leave to report the case, I heard my other daughter speaking on the phone with some people, but she tried to hide the phone on seeing me. But, when I forcefully enquired, they told me they were friends of my daughter. They told me they were going to join me to report the case at Juaso police station,” he is reported to have said.

Joseph Boakye added that further probing led him to the revelation that the boys on the other side of the line were the masterminds behind the plot, with his presumably ‘missing’ daughter lodging with them at a hostel at Agogo.

“They called my sister around 11 pm on the day of the kidnap to demand GHc15,000 from her. They later called my other sister to demand another GHc5,000,” he added.

Having blown their cover, Joseph Wiredu Boakye is reported to have taken the case to the police who begun investigations into it.

The boys were eventually arrested while the two sisters were questioned and released.

“So the officers followed them to a hostel and discovered my daughter there and brought all three back to the police station,” the father added, the report said.