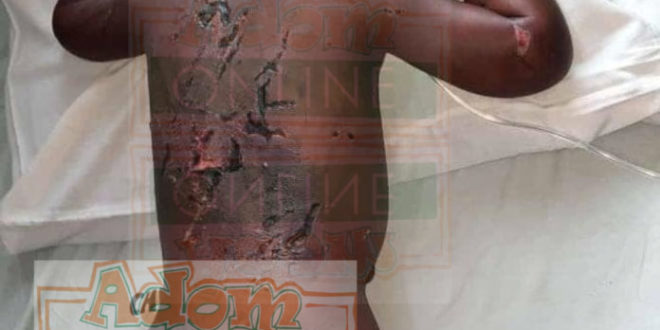 Commander of the Manhyia Divisional Police Command, ACP Kwaku Buah, has given an update on the reasons given by a father for virtually mutilating his 3-year-old son’s body.

According to ACP Buah, the abuser father, Ebenezer Nana Bonsu, has told the police that his actions were borne of his 3-year-old son’s insubordination.

ACP Buah, however, said police suspect Bonsu’s actions could be due to mother of the boy’s decision to opt out of their relationship.

“Bonsu was in a relationship with the boy’s mother until she recently decided to opt out so we suspect it’s the reason he has decided to unleash his anger on the little boy,” he said.

ACP Buah who was speaking on Adom FM 106.3 FM‘s morning show, Dwaso Nsem, said Mr Bonsu is currently in police custody to assist with investigations as the child receives treatment at the Manhyia Hospital.

“I’m not a doctor but the child’s condition looked bad to me and we pray it’s not worse than we see now because he is to go for a scan today,” he disclosed.

“All the excuses he [the boy’s father] gave didn’t make sense to us because I don’t know what offence can merit such a punishment for a 3-year-old boy,” he added.

He, however, said the abusive father accepted his fault but blamed the devil for his action.

Mr Bonsu is being prepared to face the law, according to ACP Buah.