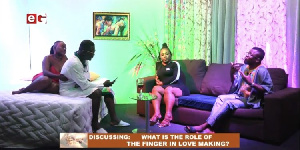 Find out the importance of the finger in love making

He explained love-making as leaving an unforgettable memory in the mind and heart of your partner and believes one way of doing this is by using the fingers.

He noted that fingers play a lot of roles during lovemaking and also there is a difference between lovemaking and foreplay but people tend to contradict the two.

“Some men can finger the women so well that they (women) prefer the fingers to dicks. But as I said, it all depends on how you use it and what the men introduce to their partners from the beginning,” he said.

But most often, a lot of ladies go for the fingers because it makes them reach orgasm faster than the dick,” he emphasized.

Tags find FINGER importance IN LOVE making OF OUT THE