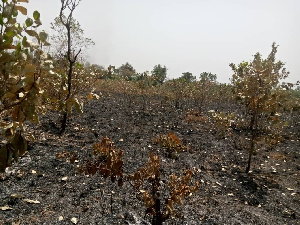 After several engagements to ensure fire outbreak which normally occurs during the dry season on Kwahu Mountain is prevented, some unknown persons have turned a deaf ear over this call.

Agoo News reports that another unwanted development has occurred despite a keen monitoring exercise by stakeholders in Kwahu.

Part of the mountain has recently caught fire on the Nkawkaw Atibie road just after climbing the mountain.

Speaking to Agoo News’ Eben Kojo Nyavor, the Municipal Chief Executive for Kwahu South Emmanuel Attah Ofori Snr expressed worry over the menace. He believes the perpetrators normally run their exercise at night when everyone has gone to sleep.

According to him, several engagements have been held, educating the public to ensure no fire outbreak is recorded on the mountain adding that, the assembly is going to add more to their actions.

He said the culprit will be dealt with if found, to serve as a deterrent to others.

Some experts speaking on Nkawkaw based Agoo FM have severally warned that the Odweanoma Mountain risk collapsing if the fire outbreaks persist.

The MCE said his outfit will ensure this menace will be a thing of the past.

On his part, the Assemblymember for Atibie Electoral Area Isaac Awuah Mensah said, his colleagues’ assembly members in Kwahu have all come together, working hard to ensure the mountain is prevented from a rampant fire outbreak.

“We will urge hunters, farmers, wee smokers and those who could possibly cause this to desist from such attitude because we are not going to entertain anyone when they are caught,” he added.