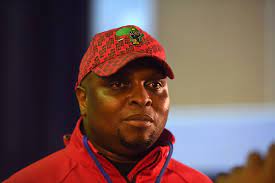 The deputy president of the EFF, Floyd Shivambu, has been cleared of a charge of common assault.

The decision was made on Wednesday in the Cape Town Magistrate’s Court after Shivambu applied in April, when his trial wrapped up, not to be prosecuted.

He pleaded not guilty and had not yet testified.

The magistrate, Lindiwe Gura, rejected the evidence of De Kock and the witnesses as contradictory.

She also said the complainant was contradictory with regard to his medical evidence.

She added that one of the witnesses even tailored his evidence to suit the State’s case.

De Kock was part of a media contingent at Parliament, who was waiting for feedback on Patricia de Lille’s DA disciplinary hearing – this was before she had left the party.

Shivambu had made a Section 174 application, which meant that, if at the close of the prosecution’s case the court was of the opinion that there was no evidence the accused committed the offence or any offence, of which he may be  convicted on the charge, the accused can be discharged.

De Kock had testified that Shivambu had tried to choke him, and pushed him up against a wall.

He also shouted, “leave my stuff alone”, in an incident that, he said, had terrified him.

Shivambu contended that De Kock wore no media accreditation at the time and was not accredited to be in the precinct.

During the trial, much focus was placed on slowing down the video of the incident to ascertain whether De Kock was wearing his accreditation, and whether Shivambu’s hand had made contact with De Kock’s neck.

De Kock testified that not only was he accredited, but his certification and lanyard could be seen in the video.

Two other people were also captured in video footage of the confrontation with De Kock, but they had not been named or charged.

The EFF welcomed the “sound, rational and logical decision” to clear Shivambu.

“The EFF Deputy President will continue to focus on the work of quantitatively and qualitatively building the organisation, towards the immediate goal of 1 Million EFF Members before the end of 2022,” it said.