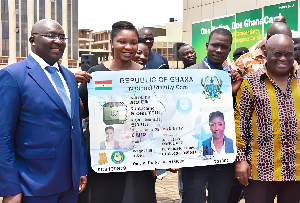 For now, carry your normal passport when travelling – Bawumia on e-passport

Vice President Dr Mahamudu Bawumia asked Ghanaians to carry their normal passports whenever they are travelling outside the country as government undertakes steps to actualize an e-passport regime.

While stressing the importance of government’s digitization efforts and its centrality to among other things, improving financial accessibility, the VP promised to update citizens on issues around the subject of e-passports.

“As a result (of the Ghana Card), Ghana will be one of only a handful of countries where a national identification card also constitutes an e-passport, an illustration of the opportunities of digitisation. I will of course update citizens on developments concerning the activation of the e-passport feature, but discussions are positive.”

Dr Bawumia added, “For the time being, I urge travellers to, as always, bring their passport and other forms of the required documentation with them. Additionally, citizens should continue to apply for their own Ghana Card so that they can be part of this digital revolution.”

His comments come amid controversy around the propriety and or feasibility of Ghanaians travelling with their Ghana Card as e-Passports.

Bawumia was speaking on a wide range of issues in the February 2022 edition of the Pan African Visions, PAV, Magazine. Bawumia actually graced the cover of the edition with the headline “Defying The Odds – A conversation with Ghana’s VP Dr. Mahamudu Bawumia.”

The news back home was, however, that ICAO had certified the Ghana Card as an e-passport that could grant users access to 197 countries and over 44,000 airports worldwide.

In a formal statement sent to GhanaWeb days later, ICAO pointed out what it described as ‘incorrect’ media reports that it had certified the Ghana Card and made it equivalent to an e-Passport.

The organization explained among other things that its mandate did not include certifying documents that could replace passports in international travels.

ICAO furthered that some media coverage of its event in Montreal, Canada relative to Ghana signing on to its Public Key Directory (PKD), showed a level of misunderstanding of “its role in defining what documents may be accepted by States for the border control and immigration processes.

Aide to Bawumia, Gideon Boako, issued a statement explaining why and how the statement from ICAO was in sync with what Bawumia had always preached.

His Executive Secretary, Augustine Blay, also granted a raft of interviews to explain what the e-Passport meant and its implications. He clarified that the passport could not be used for outbound travel but that Ghanaians entering the country and travelling within West Africa could use it.

Meanwhile, the Ranking Member on Foreign Affairs, Samuel Okudzeto Ablakwa, has filed a motion demanding that the Minister of Foreign Affairs comes before Parliament to give clarity to the issue of Ghana Card as a traveling document.

The Ghana Airports Company Limited, has meanwhile ordered airlines and airports around the world to accept the Ghana Card as a travel document for nationals flying into Ghana.

ICAO is aware of recent and incorrect media reports claiming that ICAO has agreed that the Ghanaian ID card is equivalent to an ePassport. However, it is not ICAO’s role to certify the use of a State’s Identity Card for international travel in place of a passport.

It is the sovereign right of each individual State to decide upon its entry and exit requirements and the documents that need to be presented by those travelling to and/or from its territory.

Ghana’s successful conclusion of its key ceremony on 9 February is a major milestone in its efforts to provide for more international acceptance of its electronic travel documents.