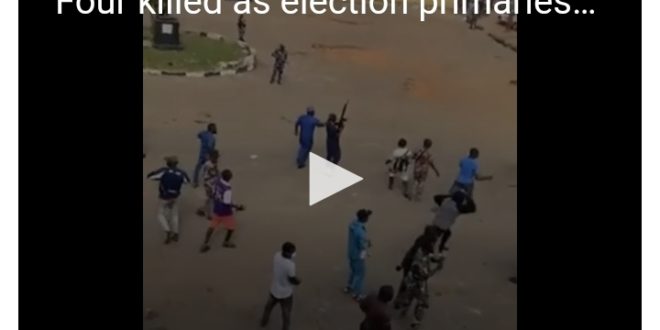 Reports indicate that at least four people have died after an All Progressives Congress primary election for House of Representatives and house of assembly positions turned bloody in Igando, Lagos state.

The incident occurred on Friday, May 27, at Igando-Ikotun and Mosan-Okunola council secretariat where the primary election was been held.

Videos making rounds showed a clash between thugs who had on them weapons. It took the help of security personnel to restore calm to the scene.

However, some persons were killed in the clash. Two of those killed have been identified as Surry Boxer and Ogunlaye.

Watch videos from the primaries below.

Previous Fufuo Methodist primary school pupils study in church building
Next Sad end of Butterfly McQueen, the ‘Gone With the Wind’ star who couldn’t attend film’s premiere for being Black