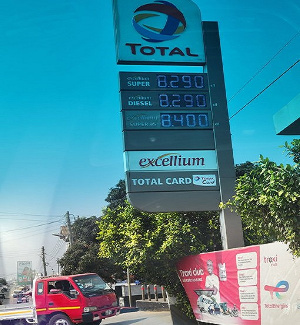 The New Patriotic Party’s desire to be the first political party under the Fourth Republic to stay in power for more than eight years may well be alive but they have now lost the “Break the 8” race to fuel prices. They may soon lose out to the dollar which is now selling at over 7 cedis on the inter-bank market.

Noted for the catchy slogans and taglines, the NPP, in the aftermath of the last election decided to steal a march on their opponents but coining the “Break the 8” slogan.

In Ghana, political parties have so far only managed to be in power for at most 8 years, which is the equivalent of two-straight terms in office but the NPP believe they have done enough to get another mandate from the Ghanaian electorate come the next election in 2024.

It would be recalled that Vice President Dr Mahamudu Bawumia in December 2021 said the governing New Patriotic Party will be the first to break the 8-year power cycle in Ghana.

He attributed his comment to what he termed as the good governance of the NPP.

But currently, the prices of fuel have gone up to GH¢8.290, the first to break the 8 cycle.

Some Oil Marketing Companies (OMCs) have already begun adjusting the prices of fuel at various pumps.

A photo that has gone viral on social media shows that Total oil is now selling a litre of diesel and petrol at GH¢8.290.

This upward adjustment was earlier projected by the Chamber of Petroleum Consumers Ghana (COPEC) and the Institute of Energy Security (IES).

They attributed the upsurge in petroleum products to a result of a sharp increase in brent crude, gasoline, and Gasoil on the international market.

Also, the depreciation of the local currency against the US dollar is another contributing factor in the increase in fuel prices.

Previous VIDEO: Maame Serwaa spotted with mystery man
Next I must retire if I lose to Garcia – Gameboy declares