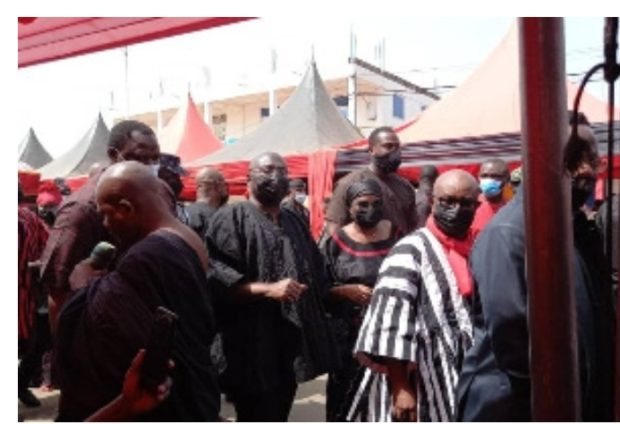 He said he knew the ruler when he (Bawumia) was at the Bank of Ghana and they had a friendship.

Dr Bawumia, who was at Hohoe to commiserate with the chiefs and people of the area, said he deemed it a duty to mourn with them.

He said since he entered into politics, the late Paramount Chief had been a mentor to him and anytime he was in Hohoe he passed by the Chief’s Palace and paid homage.

“He was a very big man! Of course, he was duly recognised – he was the President of the Regional House of Chiefs and was also on the Board of the Forestry Commission…”

Dr Bawumia said Togbega Gabusu had held many responsible positions “so he has contributed not only to the Gbi State but to Ghana as a whole.”

He expressed his deepest condolences to the family, chiefs and people of the area on behalf of President Akufo-Addo and all Ghanaians.

Togbe Keh XII, the Divisional Chief of Gbi Wegbe, said the visit showed that the deeds of the late traditional leader were recognised beyond expectations.

“We the Gbis are very grateful for such a delegation and we appreciate the love shown us.”

He expressed gratitude for the donations made to the Traditional Council and wished Dr Bawumia well.

The Vice President donated cash, assorted drinks and a bull to the Traditional Council.

Source: GNA
Related Topics:BAWUMIAGabusu
Up Next

We arrested ‘Sticka the driver, not the MP’ – Ghana Police justifies action against Nhyiaeso MP