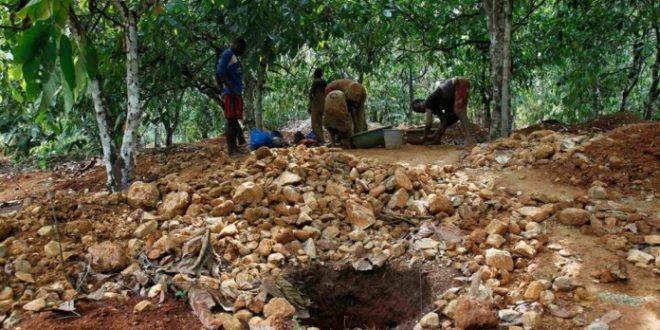 Head of Public Affairs at the Ghana Cocoa Board, Fiifi Boafo, says illegal mining activities in water bodies have compelled cocoa farmers to transport water from home to their various farms for use.

This, he said, has led to a high cost of operations for cocoa farmers since they would have to pay more for transportation of the water.

Although this adds up to the strenuous task of farming, this is the only means to ensure they produce cocoa beans that meet international standards.

Mr. Boafo noted that the country risks losing proceeds from cocoa if ‘galamsey’ activities linger on.

“Farmers now have to carry water from home to the farm before they are able to mix their fungicides and pesticides to spray their cocoa farms because the water bodies within the farming communities are not good enough for them to spray. So cost of operation for cocoa farming is high now and a farmer who is not having much from his activity now have to spend more,” he stated.

Mr. Boafo said the current figures on the destruction of cocoa plantations mainly by illegal mining is “frightening”.

“So clearly, on daily basis, we have these people taking over cocoa farms and then using the land for illegal mining. The Figure we have given to the public is figure from the beginning of the year. Indeed let me say that figure is from two cocoa regions. Meaning, if we do extensive work, the figure will be more frightening than what we see today,” he added.

According to Mr. Boafo, some traditional leaders take lands belonging to cocoa farmers who are mostly not alludial owners and do not hail from the community and hand over the lands to illegal miners.

He noted that COCOBOD’s legal team has been made available to farmers who experience this ordeal.

“Of course at present, what we are doing is that our legal team is available to help such farmers who are going through such difficulty.”

In May this year, Fiifi Boafo told Bloomberg that more than 19,000 hectares, or about two percent of cocoa plantations, have been destroyed by ‘galamsey’.

Already, there have been concerns that Ghana is unlikely to meet its initial output target of 850,000 tons this year.

Cocoa output slumped 34% in the first six months of the season, compared with the same period last year.

Meanwhile, the Managing Director of the Ghana Water Company Limited (GWCL), Dr. Clifford Braimah, has advocated the involvement of the Water Resources Commission in the fight against illegal mining in Ghana.

According to him, this will strengthen the inter-agency efforts being employed to deal with the menace.

“For us in Ghana Water Company, we take the resource itself to produce water for citizens. But we do not have the role or the power to monitor the water bodies. It is the Water Resources Commission.