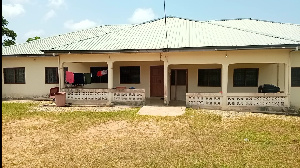 The District Magistrate at Nkroful, Her Worship Awo French Amissah has been forced to move out of her official residence due to incessant galamsey activities taking place behind the building.

A letter by the Western Regional Judicial Service notified the District Chief Executive for Ellembelle about the development.

According to the letter dated July 14, 2022, the decision by the magistrate to relocate out of the house is a result of the treat posed to her safety and security by the illegal miners operating right behind the house.

“I write to inform you that the Magistrate of the Nkroful District Court has relocated out of the government bungalow assigned to her as the activities of the illegal mining at the back of the bungalow is a threat to her safety, security and health.

“The ongoing mining at the back of the bungalow is affecting her health as the galamsey takes place during day and night depriving her of the needed rest/sleep. Also, the chemicals used in the mining activities and the noise from the area are having impact on her health,” the letter signed by the Regional Judicial Administrative Officer, Diana Naana Asiam read in part.

According to the judicial service, the galamsey activities also pose a threat to the life of the magistrate due to the series of clashes involving the operators within the area.

“On 5 March, 2020, as directed by the then Supervising High Court Judge, the Regional Administrator and the Regional Works Superintendent visited the Assembly – District Chief Executive and Coordinating Director on how to provide conducive accommodation for the Magistrate.

‘There was assurance from the Assembly that the galamsey activity would be stopped and the assembly would also provide the needed security and environment for the Magistrate,” the letter stated.

Despite the assurance from the assembly, the Judicial Service noted that the situation has worsened stressing that it informed the decision by the magistrate to move out of the residence.

“However, the situation has gotten worse. Taking into consideration all these factors, the assigned bungalow is not conducive for the magistrate. I therefore write to inform you that the Magistrate has moved out of the bungalow for her safety, security and health,” the Judicial Service said.