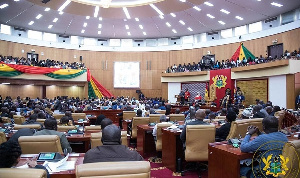 Parliament is to rescind the third reading and passage of the Vigilantism and Related Offences Bill, 2019 following the detection of an anomaly in the bill.

Barely three days after the passage of the bill into law, the Chairman of the Committee on Constitutional, Legal and Parliamentary Affairs, Mr Ben Abdallah Banda, and the Ranking Member on the committee, Alhaji Inusah Fuseini, told journalists on Wednesday that the anomaly, which had to do with the sentencing regime, was detected during the compilation of the various clauses in the bill.

They explained that a clause in the bill indicated that a person convicted of a vigilantism related offence who served a minimum of five years in prison could not hold public office.

Therefore, they said, the Attorney-General and Minister of Justice, Ms Gloria Akuffo, would move a motion for the rescission of the third reading to take the bill to the second reading stage for the clause to be amended from a minimum of five years to 10 years to be consistent with the provision in the Constitution.

Thereafter the bill would be taken through the third reading and then passed into law, they added.

It will then be assented to by the President for it to be effective.

Last Monday, the Majority and the Minority sides of Parliament unanimously voted in favour of the passage of the bill when the Speaker, Professor Aaron Mike Oquaye, put the question to a voice vote.

The Vigilantism and Related Offences Bill, 2019 applies to a person who participates in the activities of a vigilante group that is associated with, related, connected or affiliated to a political party; a person who acts as a land guard and a person who engages in other acts of vigilantism.

It also seeks to disband political party vigilante groups within one month of its passage into law.

It spells out prison terms for persons convicted of vigilante activities, with a maximum of 15 years.

The bill was laid under a certificate of urgency, in accordance with Parliament’s Standing Order 119, and the Committee on Constitutional, Legal and Parliamentary Affairs, which deliberated on the bill, unanimously agreed that it was of urgent nature.

It, however, recommended that further consultation was needed with stakeholders to make it more comprehensive.

Following engagements with stakeholders, many amendments were proposed, which culminated in its second reading and consideration and the eventual third reading and passage into law.

The passage of the bill into law was in fulfilment of President Nana Addo Dankwa Akufo-Addo’s promise, when he presented the 2019 State of the Nation Address, to cause Parliament to enact legislation to deal with acts of vigilantism in the country.