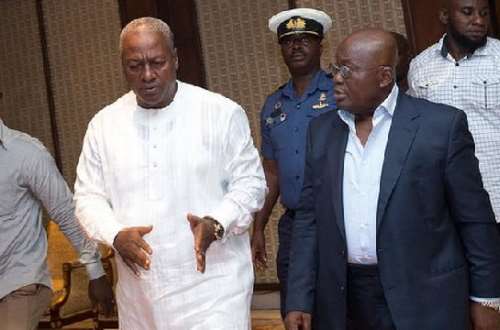 Responding to a challenge thrown by the president while he addressed the governing New Patriotic Party’s National Delegates Conference in the Ashanti Region, Kumasi, on Sunday, 19 December, the former President says President Akufo-Addo must focus on fixing the economic mess.

“I think the President must take his responsibilities seriously and focus on working to change the circumstances of our people, rather than the rabble-rousing skits he serves the nation”, the 2020 flag bearer of the opposition National Democratic Congress (NDC) said in a Facebook post on Monday, 20 December 2021.

According to the president: “We have spent more money on improving the circumstances of our people than any government in the 4th republic and I am very proud that we are the government that has brought this level of achievement to the people”.

He added: “So, when you leave here, go with your shoulders and hand right in the sky that you belong to a government that has been most diligent in supporting the welfare of the people of Ghana”.

Mr Akufo-Addo then declared: “No government has our record in expenditure on social and economic transformation”.

“What is the one policy that the NDC and their leader John Mahama have thought about in these five years in opposition? The answer is zero”, he said.

In a brief response, Mr Mahama said: “To answer his rhetorical question on policy, if only he took a moment, in the comfort of his chartered jet, to read the People’s manifesto, he would have, at least, learnt about the ‘Big Push’ (an accelerated infrastructure plan for Ghana), ‘Free Primary Health Care Plan’, the ‘1 million jobs plan’, ‘Ghana FIRST’ (Framework for Industrial Revitalisation, Support and Transformation) and several other well-thought-through and costed policies”.

Mr Mahama said: “I am willing to provide him with an autographed copy of the manifesto”.

“With his speech of yesterday [Sunday, 19 December 2021], he has carved his niche as a good campaigner, but unfortunately a poor leader as Ghanaians have found out at great cost”, the former president observed.