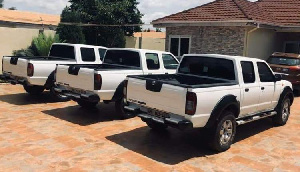 A Toyota Hilux Pickup with registration number GH 6207-20 belonging to the Ghana Highway Authority has been snatched at gunpoint at Jisonayili, a suburb of the Northern Regional capital, Tamale.

The vehicle was robbed after its driver suddenly stopped because a motor rider in front of him fell off his motorbike, myjoyonlince.com reports.

According to the report, after the driver stopped the vehicle to ensure that it did not run over the person who had fallen off the motorbike, a gunman hit the window of the Toyota Hilux Pickup and ordered its two occupants to step out of the vehicle.

The robbers, including the person who fell off the motorbike, took off the number plates of the pickup and drove off.

Regional Crime Officer of the Northern Regional Police Command, Superintendent Bernard Baba Ananga, who confirmed the incident, said that investigations are ongoing to arrest the robbers.

Superintendent Ananga said that all highway patrol units in the region had been informed, adding that the police have also closed exit points of the region.

“We have since declared a manhunt for these armed robbers, and we believe most of them are coming from the same location and going round taking vehicles like that,” he added.

The superintendent said that four vehicles had been snatched in the same area just this year, and the police have been able to recover two of them.

Previous Why Supt. Atuluk must be put to order by the IGP
Next VIDEO: Fameye causes commotion at airport