Home / BUSINESS / Ghana Month: How the cedi got its name 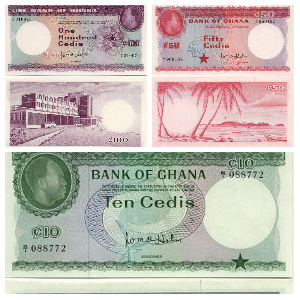 Ghana Month: How the cedi got its name

Many years ago, before Ghana gained its independence in 1957, locals in the Gold Coast used the British West African Pound which was the currency of the British colonies in the region.

Before this, however, cowry shells were the only medium of exchange and were also used to store wealth. This was until British colonizers demonetized it as a form of currency in the early twentieth century.

Then in 1958, a year after Ghana gained its independence from colonial rule, Ghana’s first president, Osagyefo Dr. Kwame Nkrumah introduced the Ghanaian pound which was in use until 1965.

The Bank of Ghana took over as the new monetary authority and issued its own currency in the form of Ghana pounds, shillings, and pence on 14th July of the same year.

8 years after, Dr. Nkrumah decided to move away from the British colonial monetary system and adopt the widely accepted decimal system.

This is where the ‘Cedi’ came in. Derived from the Akan word “sedie” which means cowries, the Cedi notes were introduced on 19th July 1965. The Pesewa whose name was derived from the British Penny also was introduced and these currencies replaced the previous Ghana pounds, shillings and pence.

The “Pesewa” represented the smallest denomination (quantity) of the gold-dust currency regime.

The Cedi was equivalent to eight shillings and four pence (8s 4p) and had the portrait of the then President, Dr. Kwame Nkrumah.

According to the Statistics and Reports Office of the BoG, the military government, after the overthrow of Nkrumah through a coup d’etat, decided to replace the existing cedi which bore Nkrumah’s portrait, with one without his portrait.

From 1965 to the present, various cedi and pesewa denominations have been put into circulation.

The new Ghana Cedi was introduced on July 3, 2007, with one cedi equal to 10,000 old Cedis. It was the highest-valued currency unit issued by sovereign countries in Africa in 2007.

The Ghana Cedis is printed in the United Kingdom, by a security printing firm called De La Rue. This is according to retired Deputy Governor of the Bank of Ghana (BoG), Emmanuel Asiedu-Mante, who revealed this in an interview with Graphic.com in 2019.

Mr. Asiedu-Mante also revealed that the cedi has also been printed with firms in Germany and France too.

Tags CEDI GHANA GOT How ITS MONTH name THE