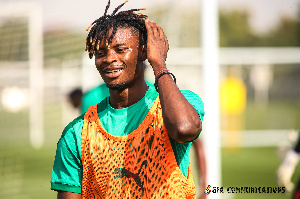 Moldova-based midfielder Edmund Addo has been released from Ghana’s squad ahead of their two-legged 2022 FIFA World Cup playoff tie with Nigeria due to injury, GHANASoccernet.com can exclusively report.

The FC Sherrif star arrived in Ghana with an injury (unspecified) he picked up playing for his club side.

GHANASoccernet.com understands, the 21-year-old underwent an MRI on Wednesday in Kumasi and the result showed severe damage.

Addo is expected in the capital of Accra on Thursday to see a specialist at Korle-Bu Teaching hospital.

Already, the Black Stars have been ravaged by injuries with the likes of Baba Rahman, Kamaldeen Sulemana, Samuel Owusu, Richmond Boakye-Yiadom sitting out this month’s contest.

Addo popped up in Europe with some superlative displays for FC Sheriff in this season’s  UEFA Champions League.

His consistent displays earned him a place in Ghana’s squad for the delayed 2021 Africa Cup of Nations which was held in Cameroon this year.

This rules him out of selection for the first leg which will be played in Kumasi on Friday, 25 March 2022 and the return leg in Abuja four days later at the Moshood Abiola National Stadium.

The winner of the tie will be in Qatar for the World Cup later this year.

Ghana are aiming for a fourth appearance after missing the 2018 edition in Russia, while Nigeria are hoping to qualify for a seventh.