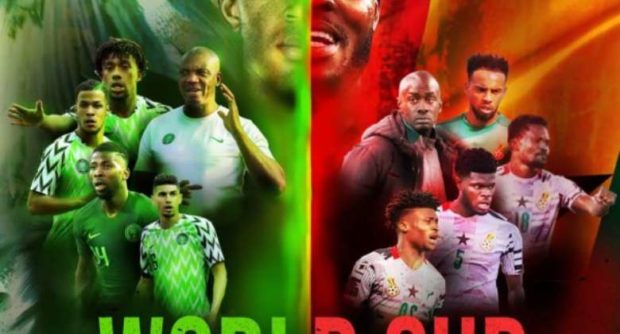 With barely two days to the showdown between one of the fiercest football arch-rivals on the African continent, residents of Kumasi are gearing up to be part of history.

For many, the crucial encounter between the Black Stars and the Super Green Eagles of Nigeria is not just another world cup qualifier but a renewal of the perennial rivalry that had existed between the two football giants in Africa.

Most football fans in the Garden City have, therefore, given indication that they would not miss the match for anything because they must have something to tell posterity about their involvement in Ghana’s possible fourth qualification to the World Cup.

The Black stars of Ghana topped Group G with 13 points ahead of South Africa, Ethiopia and Zimbabwe during their Group stage qualifiers.

Following the relocation of the match to Kumasi, the euphoria had been building up with local radio stations whipping up public interest which appears to be gathering momentum.

Discussions about the match had taken over the airwaves in Kumasi, as programmes that are not even sports related were making room to talk about the much-anticipated match.

Despite having reservations about the call-ups for the double-header, most sports pundits have shelved their concerns in order not to derail Ghana’s ambition to secure qualification to the biggest soccer event later this year in Qatar.

They are of the view that this was not the time to lament, but rally behind the team considering the huge socio-economic benefits that the country stands to gain should the Blacks Stars make it to the World Cup.

Also, on the streets of Kumasi, people were expecting the Black Stars to return to winning ways after their poor showing in the African Cup of Nations (AFCON) held in Cameroun in January.

Some of them who spoke to the GNA Sports believed Ghana stood a better chance of qualifying ahead of Nigeria and that the important thing was for Ghanaians to support the team unconditionally.

“I think Kudus Mohammed’s presence this time around and the inclusion of other new players would help the team to beat Nigeria 2:0, Bismark Okyere, a mechanic, told the GNA Sports.

Paul Adjei, a taxi driver, urged Ghanaians to continue to have faith in the Black stars despite their poor performance in the just ended AFCON tournament.

He said encounters between Ghana and Nigeria goes beyond football and stressed the need to unite behind the Black Stars to make the nation proud.

Nana Adwoa, a food vendor around the stadium was, however, excited about how she could cash in on the huge numbers that may show up at the stadium to witness the historic encounter.

She was hopeful that the match would boost the local economy and urged the team to crown the night with a massive win against their arch rivals.