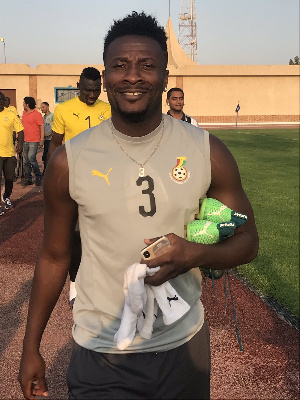 Veteran Ghanaian football administrator, Alhaji Grunsah, says former Black Stars captain Asamoah Gyan should render an apology to the public for his comments over the penalty decisionin the 2022 World Cup qualifier between Ghana and South Africa.

Bafana Bafana had claimed they were “robbed” after their 1-0 defeat last month, with the only goal in the game scored from a first-half penalty.

The all-time leading top scorer for the Black Stars described the penalty as a soft one, insisting Amartey went down too easily.

“I think the incident was a bit casual. From where I sit and how I saw it I think Daniel Amartey went down too easily but the referee was closer to the spot and probably had a better view of the situation,” the ex-Ghana captain said.

However, the King Faisal bankroller has slammed the Ghanaian star and asked him to render an apology to the public.

“If it was a penalty or not a penalty and the matter is with FIFA, we don’t need our former captain to come and say it was a soft penalty. It doesn’t work like that”, he told Happy FM.

“SAFA doesn’t have any case against Ghana in this matter so we don’t need Gyan to be making such reckless comments. If he was part of the team would he have said so. We can pardon Andy Yiadom but not Asamoah Gyan for making such comments”.

On Friday, FIFA ruled in favour of Ghana on the protest made by SAFA indicating the protests was not inadmissible as it did not meet relevant requirements but also added the decisions are subject to appeal.