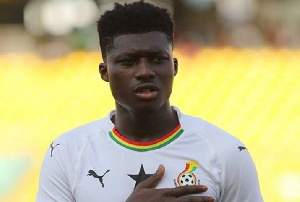 Ghanaians have taken to social media to react to Alfred Duncan’s abrupt retirement from international football.

On Saturday, May 28, 2022, Fiorentina announced that Duncan has brought his international career to an end.

The 29-year-old in his scathing letter made many allegations while explaining the cause for his sudden retirement.

The player in his letter stated that he has been ‘humiliated’, ‘discriminated against’, and also been ‘left aside for years’ despite his effort to deserve a call-up.

Alfred Duncan’s last appearance was in 2019 when Ghana faced South Africa in the 2021 AFCON qualifies. He lasted 61 minutes in the game.

Many have sided with the former Ghana U-20 player for the reasons he cited as the cause of his early retirement.

Read some reactions below.

Alfred Duncan’s story is sad one to learn.

Alfred Duncan has over 250 serie A appearances across Inter , sassuolo, Cagliari and fiorentina . I need the GFA officials to give their reason for not giving this boy a call up over the years.

A bunch of jokers!

It is only Ghana national team that will give a call up to wakaso who has not been playing football for about a year and rather ignore Alfred Duncan who has been consistent for @acffiorentina .

Bring back the love INDEED. https://t.co/w7itha6nO0

I dey understand Alfred Duncan waa. Cos i would also feel devastated if an injured Wakaso playing in China was taken to Afcon ahead of me whiles i’m playing regularly for fiorentina. He has also been called again for Ghana’s upcoming matches even after not playing for months

According to him, “ the time has come to say goodbye to the national team. My heart is sad because I wanted to write a piece of history with the Ghanaian national team but they NEVER gave me the chance to prove it” pic.twitter.com/F2qnSOcWvN

This season Alfred Duncan has played 33 Italian serie A matches, 4 coppa Italia matches, 2 assist, 2 goals and helped his club ACF Fiorentina to qualify for the Uefa Europa League and still don’t get a call up for the Black Stars team.

I never watch Alfred Duncan play but calling Mubarak Wakaso over Duncan sounds crazy. Man made 33 Appearance for Fiorentina this season and you chose Chinakaso over him?? ????????????

A Ghanaian footballer with Fiorentina, Alfred Duncan has decided to quit international football because of not making the Black Stars Squad for the umpteenth time

Many are blaming the GFA but is the GFA in charge of player selection or the coaches?

Ghana sports journalist are so so hypocrite,as Alfred Duncan announces his International retirement,see how you guys are carrying the news so fast. But you couldn’t talk more about his good work at Fiorentina. We’re our own problem indeed????????????????

Previous NPP Ashanti Reg. polls: Wontumi in comfortable lead
Next ‘If my breast mattered, I’d let you all hang on to my nipple when it floods’ – Lydia Forson to critic