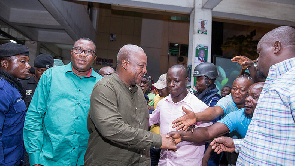 According to him, the former president’s landslide victory is a massive statement ahead of the 2020 general elections.

Mahama became the NDC’s presidential aspirant-elect after beating off competition from six other candidates in Saturday’s primaries.

“The 95% votes is a reflection of Ghanaians for the return of the NDC and John Dramani Mahama,” Ofosu Ampofo said.

He said Ghanaians are fed up with the ruling New Patriotic Party (NPP) because the government has so far failed to deliver on its campaign promises.

He was confident that Mahama would lead the NDC back to power in 2020, saying his record speaks for itself.

“Several projects started under Mahama’s leadership have been left under the mercy of the weather. Cocoa roads among others,” the NDC National Chairman stated.

“Which have reached the stage of being tarred have been neglected. The time has come for us to change our slogan and say NPP one term, Nana Akufo-Addo one term, JM b?ba biom.”

He further called on the rank and file of the NDC to build a united front in order to return the party to power in 2020.

“We want to congratulate all our party members and Ghanaians who prayed for us because we have gone through a tough process. What it means is that we are one united party poised to win victory in 2020. I’m happy that all the other aspirants have called and congratulated John Dramani Mahama.

“It is only through unity that we can realize victory in 2020. We are going to build strong party machinery…to ensure that we win 2020. The journey to the Flagstaff House begins now,” Ofosu Ampofo added.