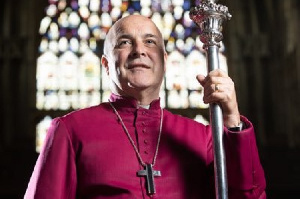 Stephen Cottrell, Archbishop of York in the United Kingdom, has stated his support for the global Anglican Church’s pro-LGBTQ+ stance in recent tweets.

Cottrell is the 98th Archbishop of York serving the diocese of York. He threw his weight specifically behind an October 26 statement issued by the leader of the Anglican community worldwide, Archbishop of Canterbury, Justin Welby.

He said in his tweet, “I share the Archbishop of Canterbury’s concerns and support the action he is proposing. I am holding the LGBTQ+ community in Ghana and across the world in my prayers.”

Cottrell, who is also head of the dioceses of the Northern Province of the Church of England becomes the second Church leader in England to publicly comment on Ghana’s anti-LGBTQ+ Bill currently before Parliament.

Bishop of London, Sarah Mullaly was the first to comment to Welby’s statement when she tweeted: “Ghana’s proposed anti-LGBT legislation is unacceptable and must be resisted.

“It would promote fear and intolerance, putting the freedom of so many people under threat. We are all love equally by God. My prayers are with the LGBT community in Ghana at this time.”

Cottrell quoted her tweet and stated thus: “I entirely share Bishop Sarah’s view that what is being proposed in Ghana is shocking and unacceptable. My prayers are with the LGBT community in Ghana and across the world.”

“I am gravely concerned by the draft anti-LGBTQ+ Bill due to be debated by the Ghanaian parliament. I will be speaking with the Archbishop of Ghana in the coming days to discuss the Anglican Church of Ghana’s response to the Bill,” his tweet of October 26, 2021 read.

The Archbishop of Canterbury, the Most Revd Justin Welby, said today:

“The majority of Anglicans within the global Anglican Communion are committed to upholding both the traditional teaching on marriage as laid out in the 1998 Lambeth Conference Resolution I:10, and the rights of every person, regardless of sexual orientation, before the law. In Resolution I:10, the Anglican Communion also made a commitment “to assure [LGBTQ+ people] that they are loved by God and that all baptised, believing and faithful persons, regardless of sexual orientation, are full members of the Body of Christ.” Meanwhile on numerous occasions the Primates of the Anglican Communion have stated their opposition to the criminalisation of same-sex attracted people: most recently, and unanimously, in the communiqué of the 2016 Primates’ Meeting.

“I remind our brothers and sisters in the Anglican Church of Ghana of these commitments.

“We are a global family of churches, but the mission of the church is the same in every culture and country: to demonstrate, through its actions and words, God’s offer of unconditional love to every human being through Jesus Christ.”