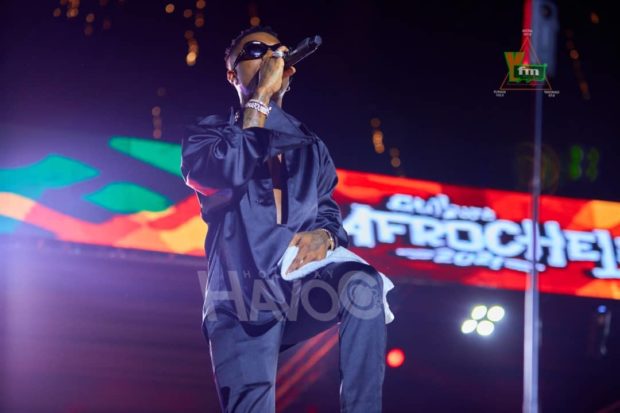 Ghana has witnessed another remarkable display of African culture and creativity at the popular Afrochella festival held at the El-wak stadium in Accra. Festival goers and music fans took to Twitter to share their thoughts and experiences at the festival.

The exciting music and cultural event brought together African and Diaspora communities to
celebrate African talent and to experience the colourful diversity of African culture.
This year’s event was filled with the captivating, creative arts installations Afrochellans have
come to expect. Additionally, massive graffiti and wall paintings by various artists from Ghana and beyond, served as a beautiful canvas for people to take lots of ‘social media worthy’ photos, individually and in groups. African culture was also celebrated in a big way through displays of fashion at this year’s event. Many of the festival goers proudly wore authentic Ghanaian Kente and African print
sewn into different styles, matched with local beads. Others also went in for a casual look with a touch of Africa. @PulseGhana & @AsaaseRadio Tweeted looks from the festival with captions, “For the culture” and “Sight from Afrochella.” African and Afro-fusion music is at the heart of the Afrochella experience, and this year was no different. The festival featured A-list music stars from across the African continent and
the Diaspora. Kofi Jamar, Gyakie, King Promise, Stonebwoy, Kojo Antwi, Nasty C, Ayra Starr
were some of the featured artists who performed. Notable artists from the UK and USA – Eugene Official, Ari Lennox and Vic Mensa also graced the stage.

Twitter’s presence was also felt at the festival in a very personal way, with a uniquely designed booth infused with African elements that attracted people including award winning Actress, Ama K. Abebrese and TV Host, Sika Osei who took and Tweeted their photos at the
booth. Senior Partner Manager at Twitter @Meistermind Tweeted, “Vibing out here with the blue bird. #Afrochella” and “I love this photo booth made for our partners to take photos” as the go- to social platform for all things Afrochella, Twitter’s partnership with the festival also enabled real time coverage of activities. The baddest festival in the world! @Afrochella #Afrochella pic.twitter.com/IOB65FKqAU

OleleSalvador gave
credit to the DJ and supporting MC in a tweet, “Big ups to DJ Loft and Kojo Manuel yesternight. They really sold out Ghanaian music to the world at the Afrochella. The enabled real time coverage of activities. Media personality and mom influencer, VanessaGyan said, ‘The baddest festival in the world @Afrochella’.

The baddest festival in the world! @Afrochella #Afrochella pic.twitter.com/IOB65FKqAU

Bloggers and media platforms including YFM, and PulseGhana also took to Twitter to express their views about Afrochella activities and the music acts. YFM simply said “Big Wiz” @PulseGhana posted, “Ayra Starr brought the vibes”. @AsaaseRadio asked, “Did you attend
Afrochella? How was the experience like?”. Popular Ghanaian Blogger @KobyKyei posted,
“How Wizkid appeared on Afrochella stage. Wow!”.
Pulse Twitter Influencer of the Year @KalyJay also threw in some words of motivation for
the newbie, “Guys if Chris Adjei gets on the Afrochella stage cheer him up. Support him.

Show him love. He is the next big thing I promise. Remember the name Chris Adjei”.

AmeyawDebrah shared, “ This is proof that Afrochella 2021 was lit” During the festival, Twitter also debuted a video thanking Ghanaians for welcoming
@TwitterGhana “home”. The video was shared across Twitter, with @elanfear saying, “2022
is going to be a BIG year”.

Twitter is what’s happening and what people are talking about right now.